Exosomes (Exo), powerful intercellular communicators, are recovered in all body fluids, suggesting suitability for diagnosis and prognosis. Easy in vitro manipulation recommends Exo as drug vehicles. Aiming to consolidate diagnostic and therapeutic potential of Exo, researchers from the University Hospital of Surgery, Heidelberg evaluated recovery and fate of tumor (TEX) and exogenous Exo in syngeneic and xenogeneic mice bearing a murine or a human pancreatic adenocarcinoma. A significant increase in serum (S)-TEX was observed 2 weeks after tumor cell application. Instead, S-TEX declined within 3-6 days after tumor excision. Intravenously injected dye-labeled TEX were rapidly cleared from the serum. Partly being degraded in the liver, the majority is taken-up by PBL, liver, bone marrow and lung cells. In the tumor-bearing host TEX persisted longer becoming enriched in tumor cells and metastatic organs. Accordingly, an antibody blockade of a TEX marker hampered disseminated tumor cell settlement in selected organs. In brief, a tumor marker panel appears suited for S-TEX recovery. In murine models, S-TEX are qualified for therapy control and follow-up studies. Despite rapid clearance from the serum, Exo uptake by host cells is most promising for tailored Exo as drug transporter. 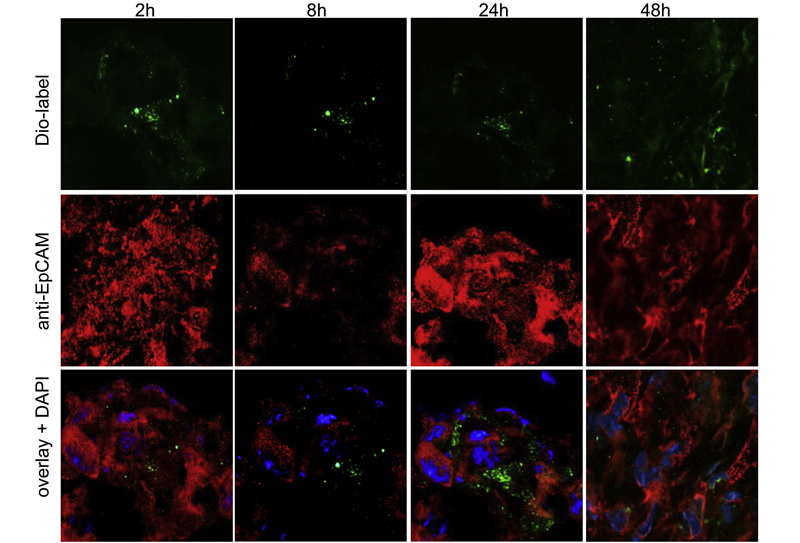 Sections of shock frozen pancreas/tumor tissue 2 h–48 h after UNKC6141 Dio-TEX application were counterstained with anti-EpCAM. Recovery of dye-labeled EpCAM+ cells was evaluated by confocal microscopy. Representative examples are shown (scale bar: 10 μm). TEX are rapidly cleared from the serum, with only a minor percentage becoming degraded in the circulation. Instead, a considerable part binds to circulating cells, particularly monocytes and likely egresses into spleen and bone marrow. The majority appears to be retained and degraded in the liver. Distinct to the healthy mouse, TEX are retained in the TB mouse for a prolonged period in the tumor tissue as well as in BM, liver and lung, which are major metastatic organs of UNKC6141.