Exosomes and Ectosomes in Intercellular Communication

Exosomes and ectosomes, two distinct types of extracellular vesicles generated by all types of cell, play key roles in intercellular communication. The formation of these vesicles depends on local microdomains assembled in endocytic membranes for exosomes and in the plasma membrane for ectosomes. These microdomains govern the accumulation of proteins and various types of RNA associated with their cytosolic surface, followed by membrane budding inward for exosome precursors and outward for ectosomes. A fraction of endocytic cisternae filled with vesicles – multivesicular bodies – are later destined to undergo regulated exocytosis, leading to the extracellular release of exosomes. In contrast, the regulated release of ectosomes follows promptly after their generation. These two types of vesicle differ in size – 50-150 nm for exosomes and 100-500 nm for ectosomes – and in the mechanisms of assembly, composition, and regulation of release, albeit only partially. For both exosomes and ectosomes, the surface and luminal cargoes are heterogeneous when comparing vesicles released by different cell types or by single cells in different functional states. Upon release, the two types of vesicle navigate through extracellular fluid for varying times and distances. Subsequently, they interact with recognized target cells and undergo fusion with endocytic or plasma membranes, followed by integration of vesicle membranes into their fusion membranes and discharge of luminal cargoes into the cytosol, resulting in changes to cellular physiology. After fusion, exosome/ectosome components can be reassembled in new vesicles that are then recycled to other cells, activating effector networks. Extracellular vesicles also play critical roles in brain and heart diseases and in cancer, and are useful as biomarkers and in the development of innovative therapeutic approaches.

Structure and composition of exosomes and ectosomes 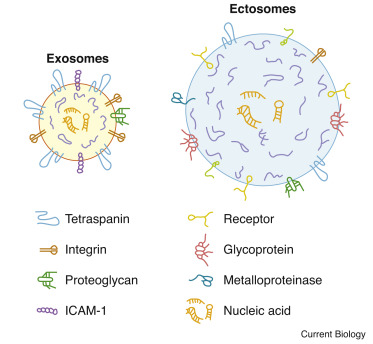 The comparative analysis of the two EV types shows that, in addition to their different sizes, both the membranes and cargoes of these EV types differ from each other, albeit only partially. In exosomes (yellow fill), the membranes are rich in tetraspanins, small transmembrane proteins that are critically important for trapping both membrane and luminal proteins. In contrast, the adhesion protein ICAM-1 appears to be present only in the exosome membrane. In ectosomes (pale blue fill), the membrane contains many additional proteins and is abundant in some receptors, glycoproteins and metalloproteinases. The cargoes trapped within the lumina of both EV types contain many proteins (purple strings). Among these proteins, those concentrated or highly concentrated in these lumina are considered to be typical of EVs; those of lower concentration might be typical of general cytosol trapped within EVs. The proteins near the EV surface might be anchored to the plasma membrane by myristoylation, palmitoylation or other sequences. At the center of the lumina of both EV types is depicted three types of nucleic acid (orange)