Exosomes and MicroRNAs – Novel Modulators of Asthma and Allergy

Intercellular communication is crucial to the immune system response. In the recent years, the discovery of exosomes has changed the way immune response orchestration was understood. Exosomes are able to operate as independent units that act as mediators in both physiological and pathological conditions. These structures contain proteins, lipidic mediators, and nucleic acids and notoriously include microRNAs (miRNAs). miRNAs are short RNA sequences (around 19-22 nucleotides) with a high phylogenetic conservation and can partially or totally regulate multiple mRNAs, inhibiting protein synthesis. In respiratory diseases such as asthma and allergic sensitization, exosomes released by several cell types and their specific content perform crucial functions in the development and continuation of the pathogenic mechanisms. Released exosomes and miRNAs inside them have been found in different types of clinical samples, such as bronchoalveolar lavage fluids and sputum supernatants, providing new data about the environmental factors and mediators that participate in the inflammatory responses that lead to the exacerbation of asthma.

Roles of exosomes in asthma and allergic processes 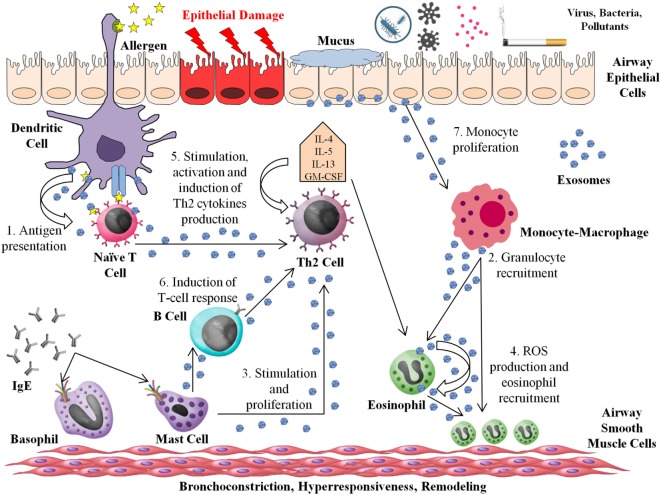 The entry of the allergen into the airway triggers the Th2 response. Mature dendritic cells (DCs) induce the differentiation of naive CD4+ T cells into CD4+ Th2 cells. The majority of immune cells are able to produce and release exosomes to the Th2 environment, acting in several ways: (1) DC-derived exosomes can stimulate T-cell responses and act as an “antigen-presenting unit.” (2) Macrophage-derived exosomes contain functional enzymes that play a potential role in inflammation, synthesizing leukotrienes (LTs) and recruiting granulocytes to the inflammation site. (3) Exosomes from mast cells can stimulate B cells and induce simulation and proliferation of others lymphocytes. (4) Eosinophil-derived exosomes increase the pro-inflammatory capacity of the same or other eosinophils, producing higher quantities of reactive oxygen species and increasing the migration of other eosinophils to the inflammation site. (5) T cells produce exosomes that are able to stimulate, activate, and increase Th2 cytokine release. (6) B-cell-derived exosomes present major histocompatibility complex class II and costimulatory molecules, which are able to induce T-cell responses. (7) Airway epithelial cell-derived exosome carry a range of different molecules implicated in the modulation of inflammation, inducing monocyte proliferation and contributing to increasing cytokine and LT generation. The secretion of exosomes from airway epithelial cells is increased by Th2 cytokines as interleukin-13.