Exosomes and the Prion Protein

Exosomes are involved in the progression of neurodegenerative diseases. The cellular prion protein (PrPC) is highly expressed on exosomes. In neurodegenerative diseases, PrPC has at least two functions: It is the substrate for the generation of pathological prion protein (PrPSc), a key player in the pathophysiology of prion diseases. On the other hand, it binds neurotoxic amyloid-beta (Aß) oligomers, which are associated with initiation and progression of Alzheimer’s disease (AD). This has direct consequences for the role of exosomal expressed PrPC. In prion diseases, exosomal PrP leads to efficient dissemination of pathological prion protein, thus promoting spreading and transmission of the disease. In AD, exosomal PrPC can bind and detoxify Aß oligomers thus acting protective. In both scenarios, assessment of the state of PrPC on exosomes derived from blood or cerebrospinal fluid (CSF) may be useful for diagnostic workup of these diseases.

Exosomal PrPC: spreading or trapping of neurotoxic proteins in neurodegeneration 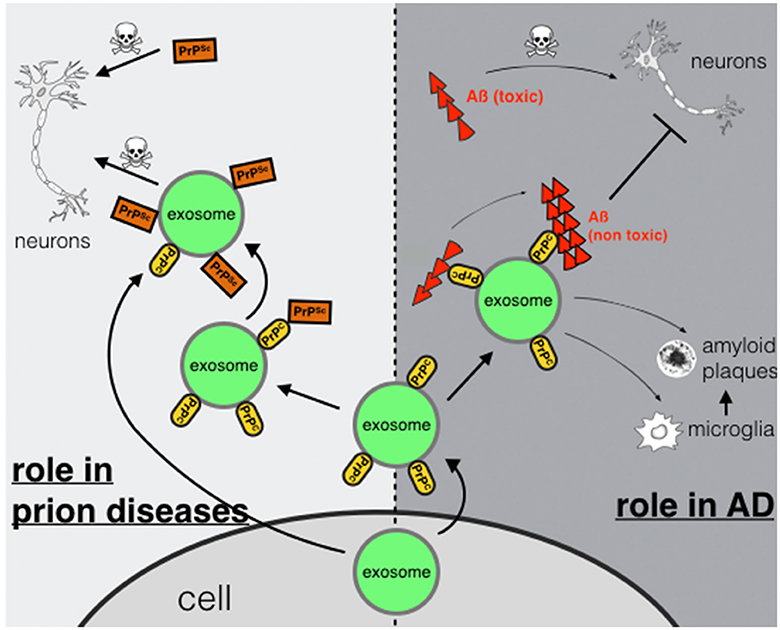 Role in prion diseases (left): transport of PrPSc via exosomes secreted from a prion-infected cell or binding of PrPSc to exosomal PrPC may enhance transmission and spreading. Role in AD (right): capturing and detoxifying of neurotoxic Aß-peptides by exosomal PrPC may act neuroprotective. Aß-fibrils bound to exosomes may contribute to Aß plaque formation or may enable uptake and degradation by microglia.