Exosomes are the Missing Link to Insulin Resistance in Diabetes 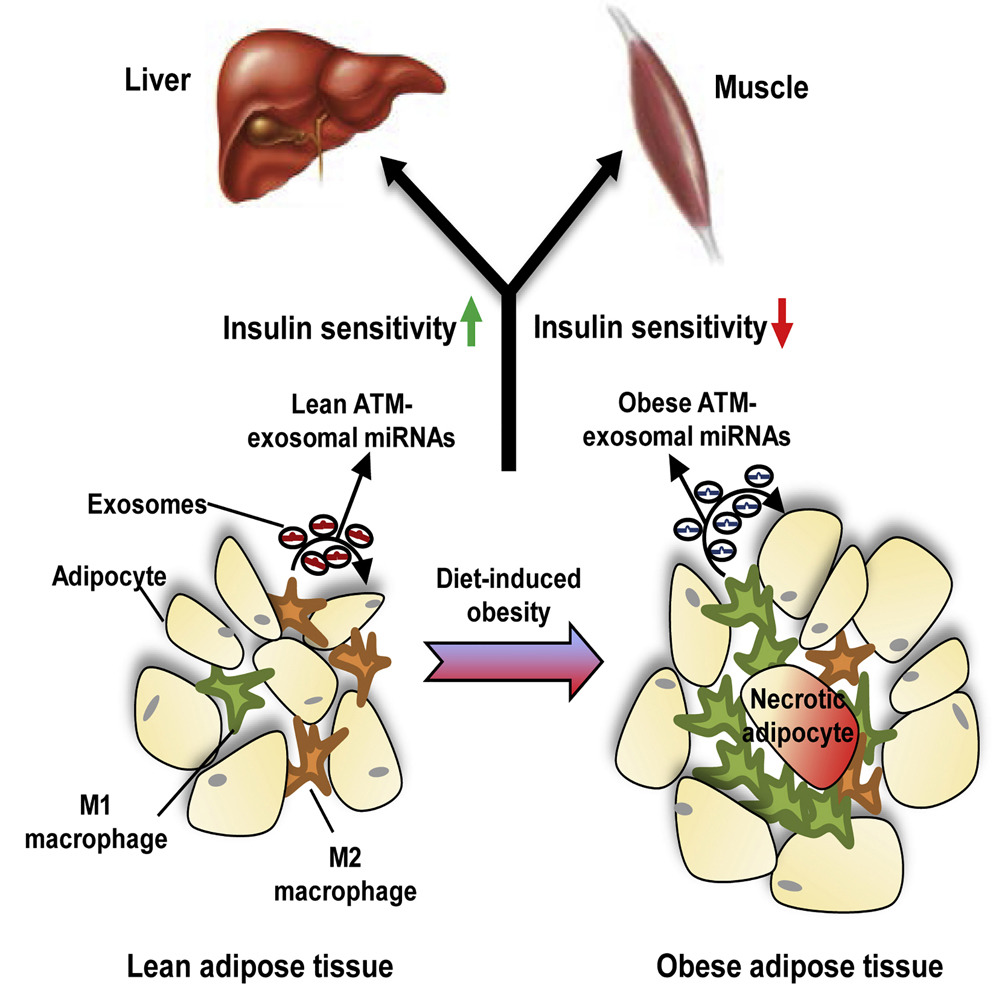 Chronic tissue inflammation resulting from obesity is an underlying cause of insulin resistance and type 2 diabetes. But the mechanism by which this occurs has remained cloaked, until now.

In a paper, published in the journal Cell on September 21, University of California San Diego School of Medicine researchers identified exosomes — extremely small vesicles or sacs secreted from most cell types — as the missing link.

An electron microscopy image shows the morphology of the bright and round shape vesicles known as exosomes.

“The actions induced by exosomes as they move between tissues are likely to be an underlying cause of intercellular communication causing metabolic derangements of diabetes,” said Jerrold Olefsky, MD, professor of medicine in the Division of Endocrinology and Metabolism at UC San Diego School of Medicine and senior author of the paper. “By fluorescently labeling cells, we could see exosomes and the microRNA they carry moving from adipose (fat) tissue through the blood and infiltrating muscle and liver tissues.”

During chronic inflammation, the primary tissue to become inflamed is adipose. Forty percent of adipose tissue in obesity is comprised of macrophages — specialized immune cells that promote tissue inflammation. Macrophages in turn create and secrete exosomes.

When exosomes get into other tissues, they use the microRNA (miRNA) they carry to induce actions in the recipient cells. The macrophage-secreted miRNAs are on the hunt for messenger RNAs. When the miRNA finds a target in RNA, it binds to it, rendering the messenger RNA inactive. The protein that would have been encoded by the messenger RNA is no longer made. Thus, the miRNAs are a way to inhibit the production of key proteins.

A team led by Olefsky, associate dean for scientific affairs, took macrophages found in adipose tissue of obese mice and harvested their exosomes. Lean, healthy mouse models were treated with these “obese” exosomes and once-normal mice began exhibiting obesity-induced insulin resistance despite not being overweight.

When reversing the process, the team found that they could restore insulin sensitivity to obese mice by treating them with exosomes from lean mice. The obese mice remained overweight, but were metabolically healthy.

“This is a key mechanism of how diabetes works,” said Olefsky. “This is important because it pins the pathophysiology of the disease in inflamed adipose tissue macrophages which are making these exosomes. If we can find out which of the microRNAs in those exosomes cause the phenotype of diabetes, we can find drug targets.”

Olefsky estimates there are probably several hundred miRNAs in exosomes, but only 20 to 30 are key. Determining which miRNAs to target will require more research, but the team has already found one likely suspect: microRNA-155, which inhibits a well-known metabolic protein called PPARγ. The researchers note that there are existing clinically effective anti-diabetic drugs that target this protein, but they trigger side effects deemed not acceptable in clinical practice.

“Still, there are a number of microRNAs that we hope will lead to new, highly druggable targets resulting in new insulin-sensitizing therapeutics,” said Olefsky. “We can obtain exosomes from blood — known as a liquid biopsy — to sequence all of these microRNAs.”

By sequencing exosomes, researchers can obtain genetic signatures that could lead to biomarkers for this disease, similar to how liquid biopsies are used to find drugs that will be effective in cancer treatment. Olfesky hopes that biomarkers for diabetes will one day be used to determine if a person is at high risk of diabetes in the next year or never. Biomarkers may also predict which patients will respond to specific therapies.

“If we sequence your exosomes, we get a signature to determine the metabolic state of your liver cells, fat cells, macrophages and beta cells,” said Olefsky. “We would be able to tell you what is going on in your liver without ever doing a tissue biopsy.”

While the team was focused on exosomes from adipose tissue, there are also exosomes created in the liver and in other cells. Olefsky is interested in studying these exosomes to determine if they also move into other tissues and cause metabolic actions.

“This could go beyond insulin resistance,” said Olefsky. “Exosomes could be causing other complications of obesity that may not be related to metabolism.”