Exosomes as mediators of neuroinflammation

Exosomes are membrane-bound nanovesicles that are shed by cells of various lineages under normal as well as pathological conditions. Previously thought to be ‘extracellular debris’, exosomes have recently generated immense interest following their discovery as mediators of intercellular communication by delivering functional proteins, mRNA transcripts as well as miRNAs to recipient cells. Although suggested to primarily serve as signaling organelles which also remove unwanted cellular components in the brain, accumulating evidence suggests that exosomes can also significantly contribute to the development of several neuropathologies. Toxic forms of aggregated proteins such as alpha-synuclein, amyloid beta and prions, that are responsible for the development of Parkinson’s disease, Alzheimer’s disease and Creutzfeldt-Jacob disease (CJD) respectively, have been shown to get effectively packaged into exosomes and spread from one cell to another, initiating an inflammatory cascade. In addition, exosomes secreted by resident brain cells in response to pathogenic stimuli such as viral proteins can also influence bystander cells by the transfer of dysregulated miRNAs that suppress the expression of essential genes in the recipient cells. Given the relevance of exosomes in brain communication and neuropathogenesis, novel therapeutic strategies are now being developed that exploit the biology of these vesicles to deliver anti-inflammatory molecules to the CNS. Exosomes may alter the way we think about brain disorders and their treatments. 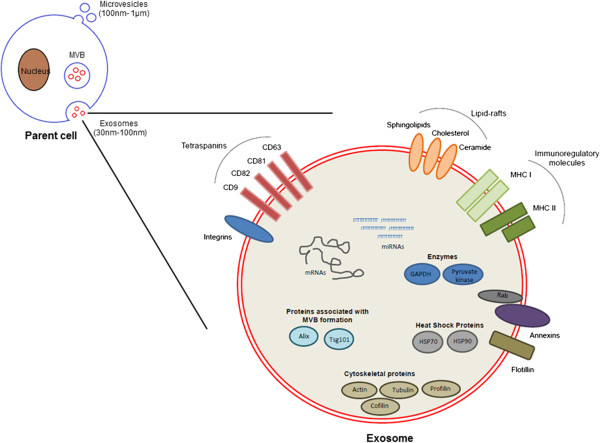