Exosomes derived from lung cancer cells confer cisplatin (DDP) resistance to other cancer cells. However, the underlying mechanism is still unknown. A549 resistance to DDP (A549/DDP) was established. Microarray was used to analyze microRNA (miRNA) expression profiles of A549 cells, A549/DDP cells, A549 exosomes, and A549/DDP exosomes. There was a strong correlation of miRNA profiles between exosomes and their maternal cells. A total of 11 miRNAs were significantly upregulated both in A549/DDP cells compared with A549 cells and in exosomes derived from A549/DDP cells in contrast to exosomes from A549 cells. A total of 31 downregulated miRNAs were also observed. miR-100–5p was the most prominent decreased miRNA in DDP-resistant exosomes compared with the corresponding sensitive ones. Downregulated miR-100–5p was proved to be involved in DDP resistance in A549 cells, and mammalian target of rapamycin (mTOR) expression was reverse regulated by miR-100–5p. Exosomes confer recipient cells’ resistance to DDP in an exosomal miR-100–5p-dependent manner with mTOR as its potential target both in vitro and in vivo. Exosomes from DDP-resistant lung cancer cells A549 can alter other lung cancer cells’ sensitivity to DDP in exosomal miR-100–5p-dependent manner. This study provides new insights into the molecular mechanism of DDP resistance in lung cancer.

Characterization of exosomes, and exosomes can confer DDP resistance to A549 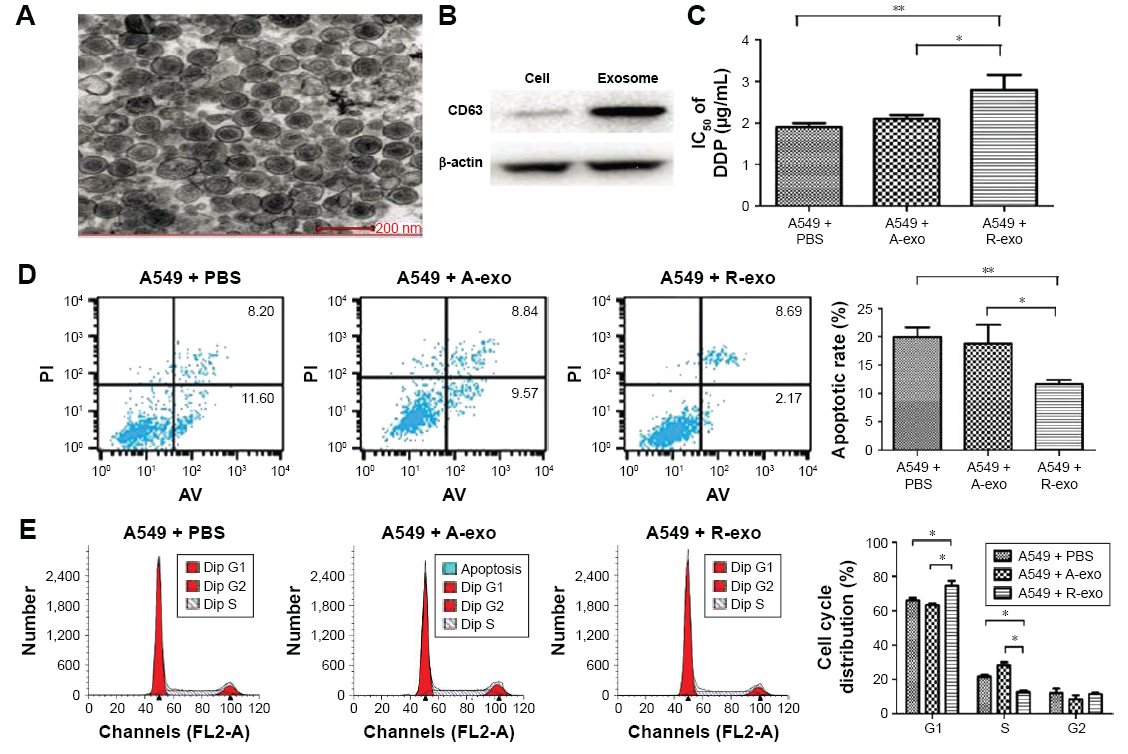 (A) Representative transmission electron microscope image of exosomes from supernatant of cancer cells (scale bar, 200 nm). (B) Western blot showed that CD63 was expressed in exosomes, undetected in cells. (C) Inhibitory concentration to produce 50% cell death of A549 incubated with R-exo was higher than that of A549 with A-exo. (D) The apoptotic rate of A549 with R-exo induced by DDP was reduced compared to A549 with A-exo (P<0.05). (E) Effects of exosomes from A549/DDP on the cell-cycle distribution. Data are shown as mean ± standard deviation. Data represent at least three experiments performed in triplicate. *P<0.05, **P<0.01.