Exosomes, a type of extracellular vesicle, have been shown to be involved in many disorders, including Alzheimer’s disease (AD). Exosomes may contribute to the spread of misfolded proteins such as amyloid-β (Aβ) and α-synuclein. However, the specific diffusion process of exosomes and their final destination in brain are still unclear. In the present study, researchers from Zhejiang University isolated exosomes from peripheral plasma and injected them into the hippocampus of an AD mouse model, and investigated exosome diffusion. They found that injected exosomes can spread from the dentate gyrus (DG) to other regions of hippocampus and to the cortex. Exosomes targeted microglia preferentially; this phenomenon is stable and is not affected by age. In AD mice, microglia take up lower levels of exosomes. More interestingly, plasma exosomes cluster around the Aβ plaques and are engulfed by activated microglia nearby. These data indicate that exosomes can diffuse throughout the brain and may play a role in the dynamics of amyloid deposition in AD through microglia. 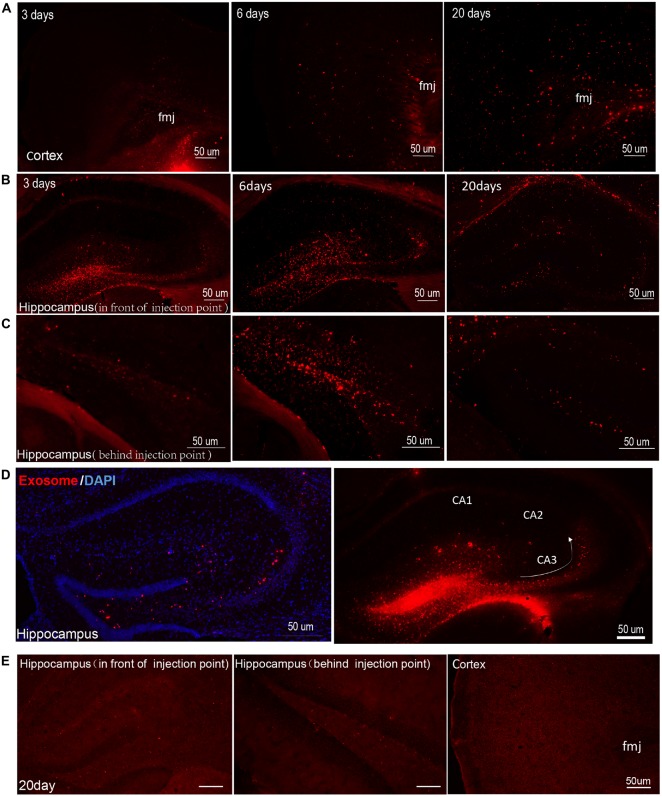 Images were captured at 3, 6 and 20 days after injection of DiI-stained exosomes into the hippocampal dentate gyrus (DG) region. DiI-exosomes can emit red fluorescence. (A) Representative photomicrographs showing the distribution of exosomes in cortex. In order to show the structure more clearly, we marked the forceps major corpus callosum (fmj) in figures. The content of exosomes increased with time in cortex. (B,C) Representative photomicrographs showing the distribution of exosomes in hippocampus in front of (B) and behind (C) the injection point. Exosomes show better diffusion in hippocampus on day 6 than on day 3. On the 20th day, most of the exosomes spread from the hippocampus to the cortex. (D) Images were captured 3 days after injection of exosomes in hippocampal DG region. The figure on the left show DiI-exosomes and counterstain with 4′,6-diamidino-2-phenylindole (DAPI), while the figure on the right shows DiI-exosomes only. The arrow shows the projection direction from the DG region to CA3. Exosomes concentrated in hippocampal CA3 region. In contrast, very few exosomes are observed in area CA1 and CA2 of the hippocampus. (E) The control (DiI incubation with PBS and being re-isolated, washed, resuspended in sterile PBS for three times as the DiI-exosomes’ preparation) were injected into hippocampal DG region. Representative photomicrographs show images captured at 20 days after injection and the images captured at 3 and 6 days after injection are shown in Supplementary Figure S2. Scale bars, 50 μm.