Researchers at the University of British Columbia previously described the role of exosomes as potential biomarkers for PCa. Differences in proteomic, lipidomic, and cholesterol content of exosomes derived from PCa cell lines versus benign prostate cell lines confirmed that exosomes are good candidates for future biomarker studies. Their extensive proteomic analysis completed alongside with the evidence of exosome uptake into a local tumour microenvironment have encouraged them to further examine the role of these vesicles in distinct mechanisms involved in the progression of PCa and castration resistant PCa.

In the current study, the researchers hypothesized that exosomes play a pivotal role in cell-cell communication in the local tumour microenvironment, conferring activation of numerous survival mechanisms during PCa progression and development of therapeutic resistance. Their in vitro results demonstrate that PCa derived exosomes significantly reduce apoptosis in LNCaP and RWPE-1 cells increase cancer cell proliferation and induce cell migration. Consistently with their in vitro findings, the researchers have demonstrated that exosomes increase tumor volume and PSA level in vivo when xenograft bearing mice were administered intravenously with DU145 exosomes. This research suggests that exosomes derived from PCa cells, regardless of the androgen receptor phenotype, attribute positively the of mechanisms that contribute to PCa progression. 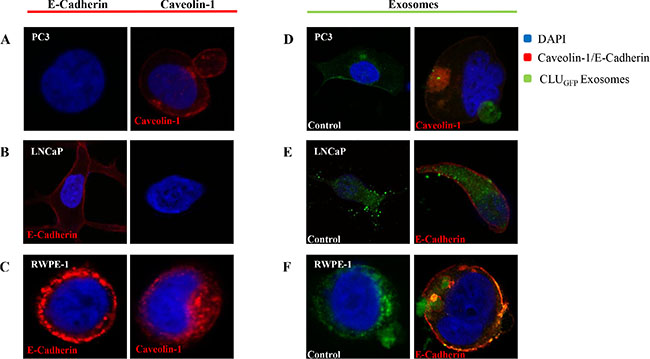 Confocal microscopy was used to visualize freshly isolated exosomes derived from a CLUGFP stably over-expressing LNCaP cell line, which contains CLUGFP, being taken up by (A) and (D) PC3 (AR-ve) and (B) and (E) LNCaP (AR +ve) PCa cell lines versus (C) and (F) benign epithelial prostate cell line RWPE-1, after overnight incubation. Both cell lines were further fixed and stained with DAPI and E-Cadherin/Caveolin-1 prior to imaging of the cells by confocal microscopy.