Cardiac stem cells derived from young hearts helped reverse the signs of aging when directly injected into the old hearts of elderly rats, a study published Monday in the European Heart Journal demonstrated.

The old rats receiving the cardiac stem cells also had increased stamina overall, exercising more than before the infusion.

“It’s extremely exciting,” said Dr. Eduardo Marbán, primary investigator on the research and director of the Cedars-Sinai Heart Institute. Witnessing “the systemic rejuvenating effects,” he said, “it’s kind of like an unexpected fountain of youth.”

“We’ve been studying new forms of cell therapy for the heart for some 12 years now,” Marbán said.

Some of this research has focused on cardiosphere-derived cells.

From his own previous research, Marbán discovered that cardiosphere-derived cells “promote the healing” of the heart after a condition known as heart failure with preserved ejection fraction, which affects more than 50% of all heart failure patients.

Since heart failure with preserved ejection fraction is similar to aging, Marbán decided to experiment on old rats, ones that suffered from a type of heart problem “that’s very typical of what we find in older human beings: The heart’s stiff, and it doesn’t relax right, and it causes fluid to back up some,” Marbán explained.

He and his team injected cardiosphere-derived cells from newborn rats into the hearts of 22-month-old rats — that’s elderly for a rat. Similar old rats received a placebo injection of saline solution. Then, Marbán and his team compared both groups to young rats that were 4 months old. After a month, they compared the rats again.

Even though the cells were injected into the heart, their effects were noticeable throughout the body, Marbán said

“The animals could exercise further than they could before by about 20%, and one of the most striking things, especially for me (because I’m kind of losing my hair) the animals … regrew their fur a lot better after they’d gotten cells” compared with the placebo rats, Marbán said.

Why did it work?

The working hypothesis is that the cells secrete exosomes, tiny vesicles that “contain a lot of nucleic acids, things like RNA, that can change patterns of the way the tissue responds to injury and the way genes are expressed in the tissue,” Marbán said.

It is the exosomes that act on the heart and make it better as well as mediating long-distance effects on exercise capacity and hair regrowth, he explained. 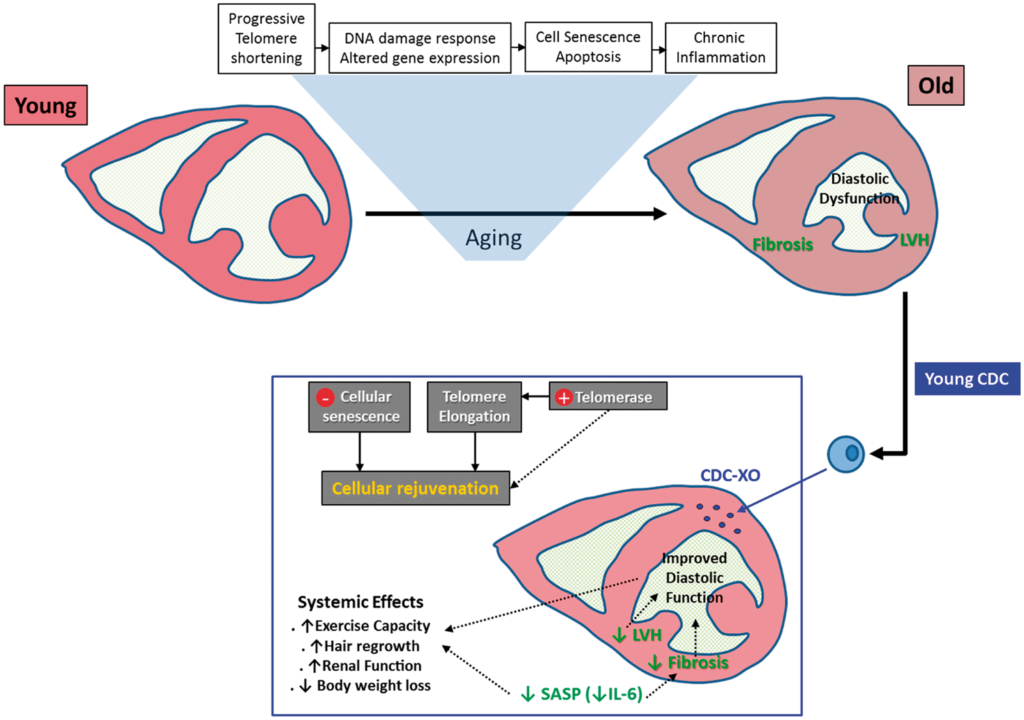 The process of aging is depicted in the upper row. Transplanted CDCs secrete exosomes (CDC-XO) which lead to cellular rejuvenation. In the heart, left ventricular hypertrophy (LVH) is attenuated and fibrosis is decreased, leading to improved diastolic function. Systemically, a reduction of the senescence-associated secretory phenotype (SASP) contributes to systemic benefits. Although not shown here, we cannot rule out remote effects of CDCs or CDC-secreted exosomes on target tissues, independent of SASP.

Looking to the future, Marbán said he’s begun to explore delivering the cardiac stem cells intravenously in a simple infusion — instead of injecting them directly into the heart, which would be a complex procedure for a human patient — and seeing whether the same beneficial effects occur.

Dr. Gary Gerstenblith, a professor of medicine in the cardiology division of Johns Hopkins Medicine, said the new study is “very comprehensive.”

“Striking benefits are demonstrated not only from a cardiac perspective but across multiple organ systems,” said Gerstenblith, who did not contribute to the new research. “The results suggest that stem cell therapies should be studied as an additional therapeutic option in the treatment of cardiac and other diseases common in the elderly.”

Todd Herron, director of the University of Michigan Frankel Cardiovascular Center’s Cardiovascular Regeneration Core Laboratory, said Marbán, with his previous work with cardiac stem cells, has “led the field in this area.”

“The novelty of this bit of work is, they started to look at more precise molecular mechanisms to explain the phenomenon they’ve seen in the past,” said Herron, who played no role in the new research.

One strength of the approach here is that the researchers have taken cells “from the organ that they want to rejuvenate, so that makes it likely that the cells stay there in that tissue,” Herron said.

He believes that more extensive study, beginning with larger animals and including long-term followup, is needed before this technique could be used in humans.

“We need to make sure there’s no harm being done,” Herron said, adding that extending the lifetime and improving quality of life amounts to “a tradeoff between the potential risk and the potential good that can be done.”

Capicor hasn’t announced any plans to do studies in aging, but the possibility exists.

After all, the cells have been proven “completely safe” in “over 100 human patients,” so it would be possible to fast-track them into the clinic, Marbán explained: “I can’t tell you that there are any plans to do that, but it could easily be done from a safety viewpoint.” 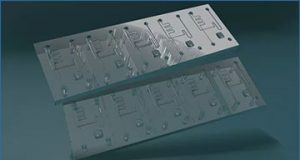