Exosomes are nano-sized extracellular vesicles participating in cell-to-cell communication both in health and disease. However, the knowledge about the functions and molecular composition of exosomes in the upper airways is limited. The aim of the current study was therefore to determine whether nasal exosomes can influence inflammatory cells and to establish the proteome of nasal lavage fluid-derived exosomes in healthy subjects, as well as its alterations in individuals with chronic airway inflammatory diseases [asthma and chronic rhinosinusitis (CRS)].

Nasal lavage fluid was collected from 14 healthy subjects, 15 subjects with asthma and 13 subjects with asthma/CRS. Exosomes were isolated with differential centrifugation and the proteome was analysed by LC-MS/MS with the application of two exclusion lists as well as using quantitative proteomics. Ingenuity Pathways Analysis and GO Term finder was used to predict the functions associated with the exosomal proteome and a migration assay was used to analyse the effect on immune cells by nasal exosomes.

University of Gothenburg researchers demonstrated that nasal exosomes can induce migration of several immune cells, such as monocytes, neutrophils and NK cells in vitro. Secondly, a mass spectrometry approach, with the application of exclusion lists, was utilised to generate a comprehensive protein inventory of the exosomes from healthy subjects. The use of exclusion lists resulted in the identification of ~15 % additional proteins, and increased the confidence in ~20 % of identified proteins. In total, 604 proteins were identified in nasal exosomes and the nasal exosomal proteome showed strong associations with immune-related functions, such as immune cell trafficking. Thirdly, a quantitative proteomics approach was used to determine alterations in the exosome proteome as a result of airway inflammatory disease. Serum-associated proteins and mucins were more abundant in the exosomes from subjects with respiratory diseases compared to healthy controls while proteins with antimicrobial functions and barrier-related proteins had decreased expression. 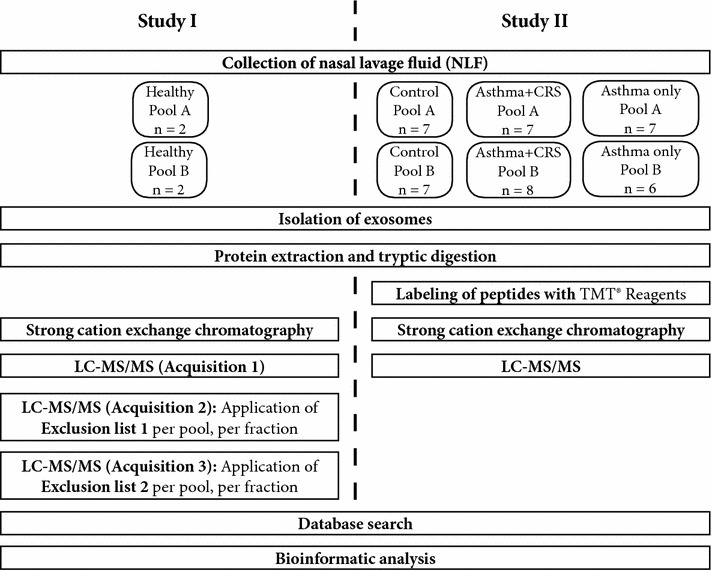 In study I, the protein content of exosomes from healthy individuals was analysed. Protein extracted from the isolated exosomes was subjected to strong cation exchange chromatography fractionation before analysis with a nano LC–MS/MS instrument. After the first acquisition all identified peptides were used to construct an exclusion list that was applied during the second acquisition. This was repeated for the third acquisition. Study II aimed to explore quantitative differences in the protein content of exosomes from respiratory diseases. The digested peptides were labelled with TMT reagents and subjected to fractionation before being analysed by nano LC–MS/MS. The resulting spectra from both study I and study II were searched in a database for identities and the reporter ions from the TMT reagents were used to quantify proteins in study II. All datasets were analysed with Ingenuity Pathways Analysis and GO Term Finder to identify enriched and associated cellular components, biological functions and processes

Nasal exosomes were shown to induce the migration of innate immune cells, which may be important as the airway epithelium is the first line of defence against pathogens and allergens. The decreased expression in barrier and antimicrobial exosomal proteins in subjects with airway diseases, could possibly contribute to an increased susceptibility to infections, which have important clinical implications in disease progression.