While tumour cells are classically known to communicate via direct cell-to-cell contact and the secretion of soluble protein-based factors such as cytokines and growth factors, alternative novel mechanisms that promote tumour progression have recently emerged. Now, new critical components of the secretome thought to be involved in tumour progression are exosomes, small vesicles of endocytic origin that carry a variety of bioactive molecules, including proteins, lipids, RNA, as well as DNA molecules. Cancer cell-derived exosomes have been shown to participate in crucial steps of metastatic spread of a primary tumour, ranging from oncogenic reprogramming of malignant cells to formation of pre-metastatic niches. These effects are achieved through the mediation of intercellular cross-talk and subsequent modification of both local and distant microenvironments in an autocrine and paracrine fashion. Here, researchers from the QIMR Berghofer Medical Research Institute summarise the recent findings that implicate this non-canonical signalling within the tumour as a critical driver of metastatic disease progression, and discuss how understanding the molecular mechanisms involved in exosome-mediated metastasis is of great value for the development of new therapeutic strategies to prevent cancer progression. 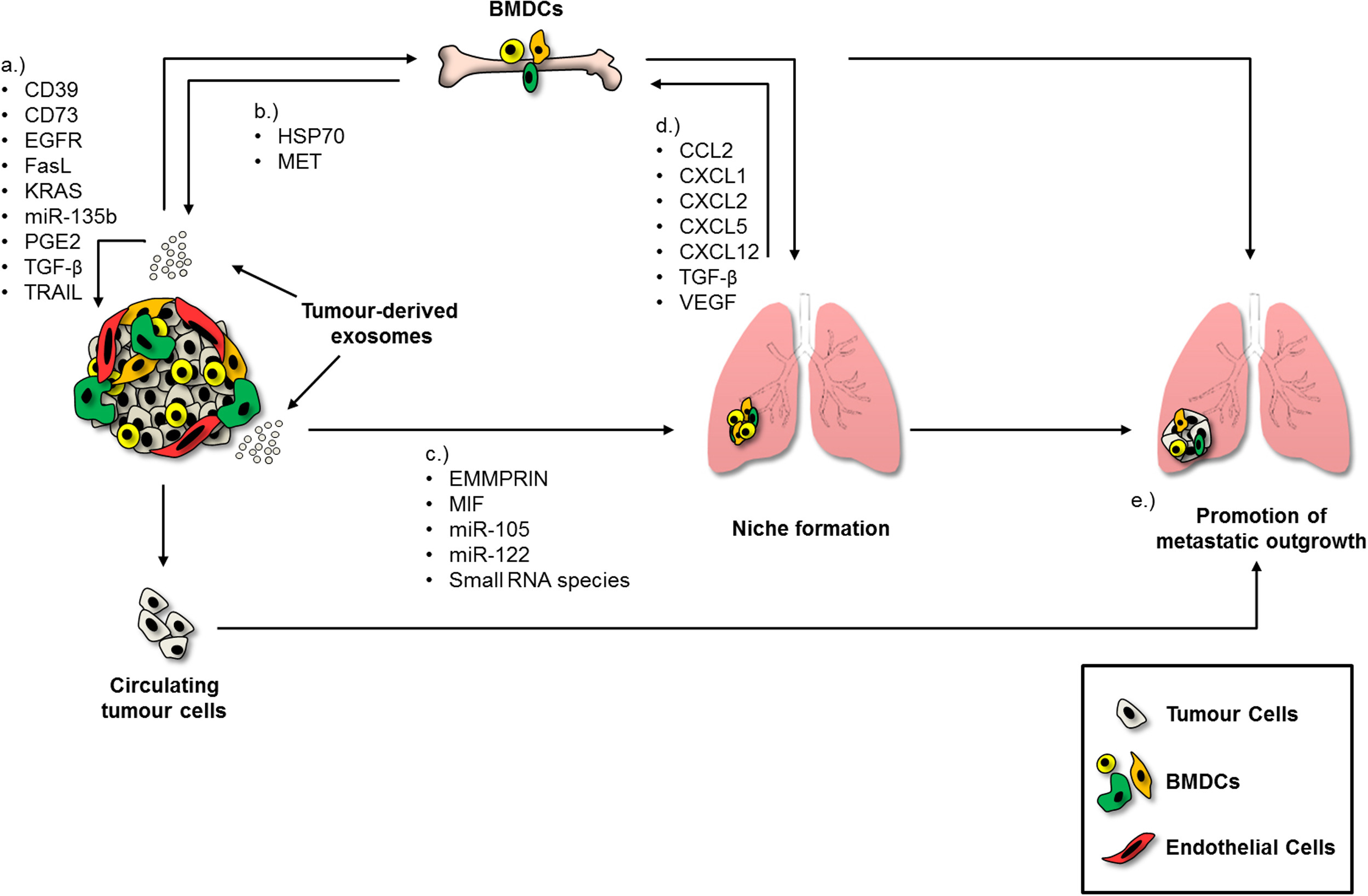 (a) Exosomes secreted by cancer cells contribute to the intercellular cross-talk and subsequent reprogramming of the primary tumour microenvironment in an autocrine and paracrine fashion. Bioactive content of exosomes have been implicated in different aspects of primary tumour progression, including angiogenesis, modulation of immune responses, and oncogenic reprogramming. (b) Moreover, exosomal factors are capable of mobilising bone marrow-derived cells (BMDCs) to the primary tumour, which in turn facilitate the establishment of a supportive microenvironment. (c) This non-canonical signalling within the primary tumour has also emerged as a critical driver of pre-metastatic niche formation. Tumour-derived exosomes can home to specific secondary organs and directly modify the local microenvironment by interacting with distinct resident cell populations. A variety of factors contained within exosomes were shown to participate in a range of biological processes, from modulation of immune and non-immune stromal cells to metabolic reprogramming. (d) Chemokines and other pro-inflammatory molecules are also upregulated in pre-metastatic sites in response to exosome-mediated signalling, leading to the recruitment and activation of BMDCs. Altogether, exosome-induced pre-metastatic niche modifications generate a microenvironment conducive to metastatic outgrowth (e), thereby facilitating cancer cell dissemination and colonisation of distant tissues in an organotropic specific manner.