Exposure to the metal manganese may lead to the development of Parkinson’s disease by promoting the release from nerve cells of alpha-synuclein, the subsequent aggregation of which causes inflammation and neurodegeneration, according to a study.

The study, “Manganese promotes the aggregation and prion-like cell-to-cell exosomal transmission of α-synuclein,” was published in the journal Science Signaling.

Increasing studies have reported that aggregated alpha-synuclein — the main component of Lewy bodies, a Parkinson’s characteristic — is able to migrate within the central nervous system (brain and spinal cord), a process associated with Parkinson’s progression.

Alpha-synuclein induces brain inflammation and neurodegeneration after being secreted from nerve cells in exosomes — tiny vesicles thought to play a role in cell-to-cell transmission of misfolded proteins.

Small amounts of manganese are essential for the proper functioning of certain enzymes in the body. However, exposure to this metal — which has a range of industrial uses as an alloy — in contaminated air and drinking water, as well as in agricultural products, may lead to a movement disorder called manganism with manifestations similar to those of Parkinson’s. Additionally, occupational exposure to manganese in welding fumes has been linked to a higher risk of parkinsonism, a general term for disorders causing movement problems that resemble Parkinson’s.

However, the precise mechanisms through which manganese exerts a neurotoxic effect, as well as its role in alpha-synuclein propagation, are not well-understood by scientists yet.

Researchers at Iowa State University conducted a range of in vitro (in the lab) and in vivo (in animal models) experiments to address this lack of knowledge as well as to evaluate whether exosomes are involved in the transmission of alpha-synuclein.

The in vitro assessments in dopamine-producing nerve cells of mice revealed that exposure to manganese induced the release of misfolded alpha-synuclein through exosomes. These exosomes were then taken up by immune cells called microglia, producing neuroinflammatory responses as reflected by the release of proinflammatory molecules TNF-alpha, interleukin (IL)-12, IL-1beta, and IL-6.

In a model of human dopaminergic neurons, exosomes caused toxicity or apoptosis — which refers to “programmed” cell death, as opposed to cell death caused by injury. 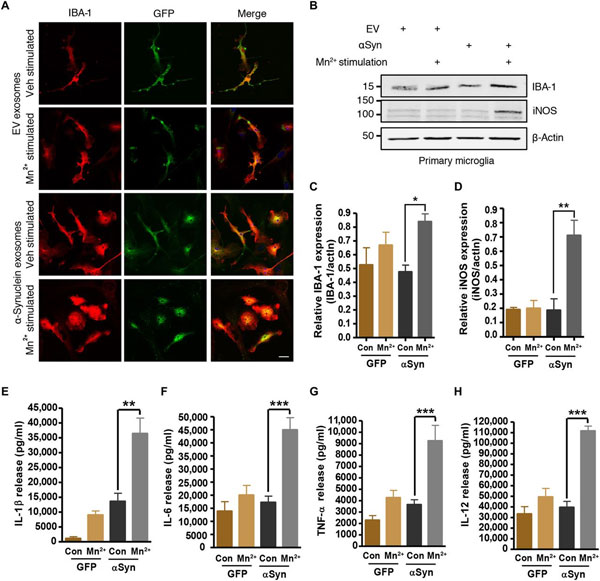 A subsequent imaging analysis found that orally delivered manganese accelerated cell-to-cell transmission of aggregated alpha-synuclein, leading to toxicity in dopamine-producing cells. This was assessed in mice injected with a viral vector to produce alpha-synuclein coupled with a fluorescent tag to enable visualization.

Mice that were given both the viral vectors and manganese exhibited more impaired motor function than those injected with the vectors alone, as well as severe loss of dopamine-producing nerve cells in the substantia nigra — an area of the brain known to be affected in Parkinson’s disease.

Researchers also found higher levels of alpha-synuclein in exosomes in blood samples from eight welders, at a mean age of 46 years, with no symptoms of Parkinson’s, compared with 10 healthy individuals used as controls.

“As a group, welders are at risk of prolonged exposures to environmental levels of metals, including [manganese],” the researchers wrote.

The team also observed that injecting alpha-synuclein-containing exosomes collected from cells exposed to manganese into the mouse striatum — a brain region connected to the substantia nigra that also shows lower levels of dopamine in Parkinson’s disease — induced more lethargic behavior as observed by reduced exploratory activity after six months. This was associated with an inflammatory response in the brain.

“Together, these results indicate that [manganese] exposure promotes [alpha-synuclein] secretion in exosomal vesicles, which subsequently evokes proinflammatory and neurodegenerative responses in both cell culture and animal models,” the researchers wrote.

“As the disease advances, it’s harder to slow it down with treatments,” Anumantha Kanthasamy, PhD, the study’s senior author, said in a press release. “Earlier detection, perhaps by testing for misfolded alpha-synuclein, can lead to better outcomes for patients. Such a test might also indicate whether someone is at risk before the onset of the disease.”