Stem cell transplantation therapy is a promising adjunct for regenerating damaged heart tissue; however, only modest improvements in cardiac function have been observed due to poor survival of transplanted cells in the ischemic heart. Therefore, there remains an unmet need for therapies that can aid in attenuating cardiac damage. Recent studies have demonstrated that exosomes released by stem cells could serve as a potential cell-free therapeutic for cardiac repair. These exosomes/nanoshuttles, once thought to be merely a method of waste disposal, have been shown to play a crucial role in physiological functions including short- and long-distance intercellular communication.

Researchers from the Ohio State University Wexner Medical Center summarize studies demonstrating the potential role of exosomes in improving cardiac function, attenuating cardiac fibrosis, stimulating angiogenesis, and modulating miRNA expression. Furthermore, exosomes carry an important cargo of miRNAs and proteins that could play an important role as a diagnostic marker for cardiovascular disease post-myocardial infarction. Although there is promising evidence from preclinical studies that exosomes released by stem cells could serve as a potential cell-free therapeutic for myocardial repair, there are several challenges that need to be addressed before exosomes could be fully utilized as off-the-shelf therapeutics for cardiac repair. 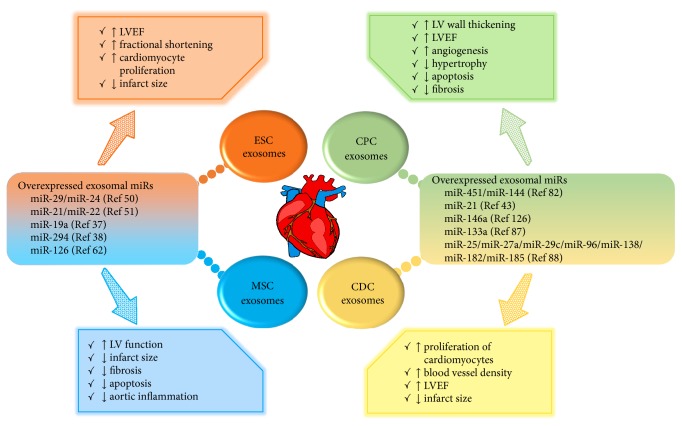 Exosomes have been found to play a critical role in cardiac repair. These “nanoshuttles” can impart information to the target cells via miRNAs, which can directly regulate gene expression. Listed are exosomes found to be upregulated in exosomes isolated from various cell lines and the cardioprotective benefits of those exosomes. Exosomes derived from mesenchymal stem cells (MSCs), cardiac progenitor cells (CPCs), embryonic stem cells (ESCs), and cardiosphere-derived cells (CDCs), administered to mice after acute myocardial infarction (AMI) have been shown to enhance cardiac function, angiogenesis, attenuate apoptosis, and fibrosis.