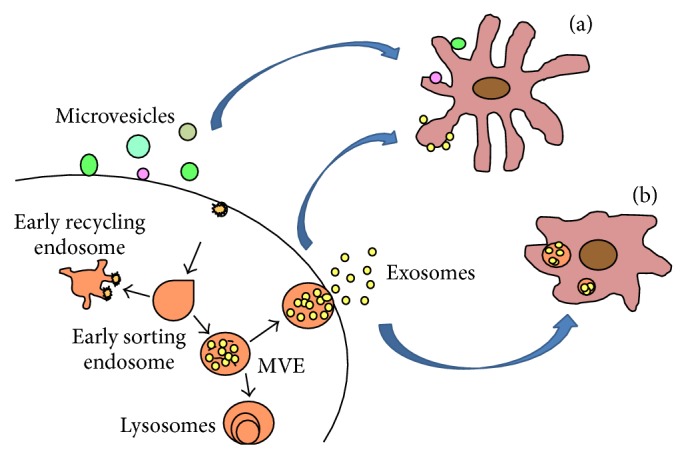 Exosomes are small cell-derived vesicles of 30–120

nm that are present in many and perhaps all biological fluids. Exosomes were first discovered in the mid-1980s by the Johnstone group, who found that, in maturing mammalian reticulocytes, the transferrin receptor and some other membrane-associated elements are selectively released in multivesicular body- (MVB-) derived circulating vesicles, which they named exosomes. Since Valadi et al. first reported in 2007 that exosomes also contain RNAs, the composition and function of exosomes have been intensely investigated. Now we know that exosomes carry various molecular constituents of their cell of origin, including proteins, lipids, mRNAs, and microRNAs (miRNAs). They are released from many cell types, such as dendritic cells (DCs), lymphocytes, platelets, mast cells, epithelial cells, endothelial cells, and neurons, and can be found in most bodily fluids including blood, urine, saliva, amniotic fluid, breast milk, hydrothoracic fluid, and ascitic fluid, as well as in culture medium of most cell types. Exosomes were initially thought to serve simply as “garbage bags” for cells to get rid of unwanted constituents. However, an increasing body of evidence has demonstrated that exosomes play an important role in cell-to-cell communication and influence both physiological and pathological processes. Additionally, molecular constituents in exosomes have been found to be associated with certain diseases and treatment responses, indicating that they may also serve as a diagnostic tool. A PubMed search generated a list of over 1,000 exosome-related articles published in the past 5 years, showing the increasing level of interest in the biomedical research community. In this review, the authors summarize recent progress in the study of exosomes as novel biomarkers for clinical diagnosis. They also provide a brief overview of the formation, function, and isolation of exosomes.