Exosomes are extracellular vesicles secreted by cells that have an important biological function in intercellular communication by transferring biologically active proteins, lipids, and RNAs to neighboring or distant cells. While a role for exosomes in antimicrobial defense has recently emerged, currently very little is known regarding the nature and functional relevance of exosomes generated in vivo, particularly during an active viral infection.

Researchers from the University of Melbourne characterized exosomes released into the airways during influenza virus infection. They show that these vesicles dynamically change in protein composition over the course of infection, increasing expression of host proteins with known anti-influenza activity, and viral proteins with the potential to trigger host immune responses. The researchers show that exosomes released into the airways during influenza virus infection trigger pulmonary inflammation and carry viral antigen that can be utilized by antigen presenting cells to drive the induction of a cellular immune response. Moreover, they show that attachment factors for influenza virus, namely α2,3 and α2,6-linked sialic acids, are present on the surface of airway exosomes and these vesicles have the ability to neutralize influenza virus, thereby preventing the virus from binding and entering target cells. These data reveal a novel role for airway exosomes in the antiviral innate immune defense against influenza virus infection. 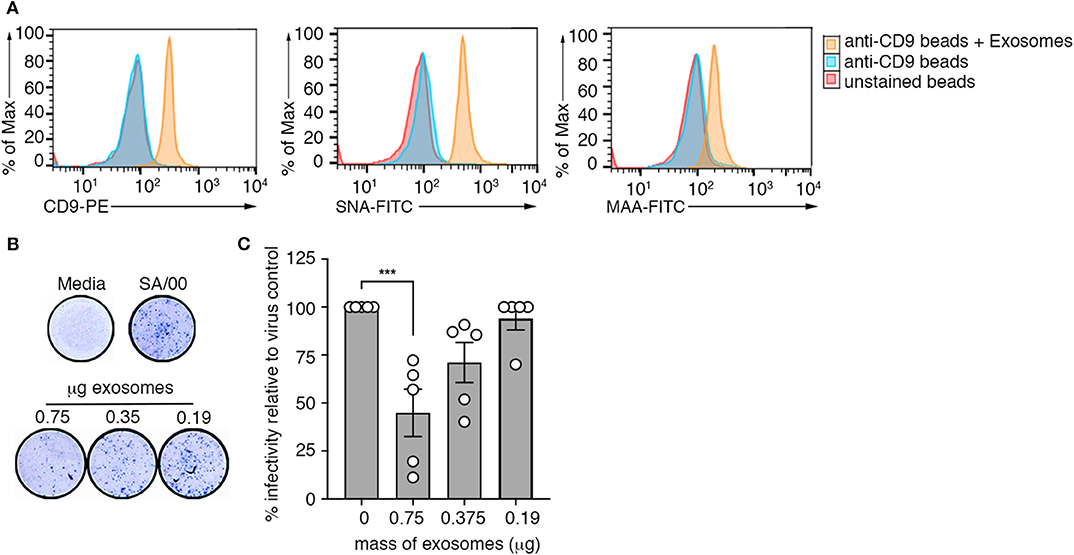 (A) Exosomes purified from the BALf of influenza infected mice were attached to magnetic beads and stained with anti-CD9-PE, MAA-FITC, and SNA-FITC and fluorescence was measured using flow cytometry. Histograms are representative of 3 independent experiments. (B,C) Exosomes purified from the BALf of mice that received an intranasal inoculation with an inert inflammatory stimulus (zymosan) were mixed at varying concentrations with influenza virus (SA/00) and incubated for 14 h on mouse airway epithelial cells (Let-1) under a CMC overlay before the proportion of NP+-foci was determined using a virospot assay. (B) Representative photos of virospot wells. (C) The percent infectivity relative to virus alone following mixing with different concentrations of purified exosomes are shown. Data pooled from 5 independent experiments (one-way ANOVA, Dunnett’s multiple comparison). ***p < 0.001.