in Headlines, Press Releases, Publications May 6, 2015 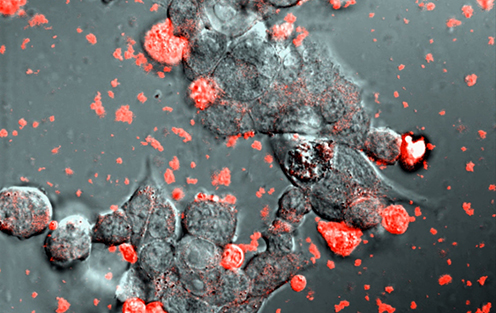 Researchers at the University of North Carolina at Chapel Hill have used exosomes — tiny bubbles of protein and fat produced naturally by cells — to bypass the body’s defenses and deliver a potent biopharmaceutical directly to the brain to treat Parkinson’s disease.

Elena Batrakova, PhD, and her colleagues at the UNC Eshelman School of Pharmacy’s Center for Nanotechnology in Drug Delivery extracted exosomes from immune cells and successfully loaded them with the enzyme catalase, a potent antioxidant that counters the neuron-killing inflammation responsible for Parkinson’s and other degenerative neurological disorders. Their work was published in the Journal of Controlled Release.

This is the first time a large therapeutic protein like catalase has been delivered to the brain using exosomes. Getting drugs into the brain is extremely difficult in general because it is protected and isolated from the rest of the body by the blood-brain barrier, which is extremely selective about what is allowed to pass through.

Batrakova and her team at the pharmacy school harvested exosomes from macrophages, white blood cells that are responsible for clearing foreign material from the body. Exosomes are tiny spheres produced by cells to carry chemical messages. They are made of the same material that makes up cell membranes. Diseases like cancer and AIDS propagate throughout the body by hijacking exosomes.

“Exosomes are engineered by nature to be the perfect delivery vehicles for proteins and genetic material,” Batrakova says. “Catalase is a huge protein, and it is almost impossible to deliver across the blood-brain barrier alone. We use exosomes from white blood cells, which are invisible to the immune system and easily interact and fuse with the blood-brain barrier to deliver their cargo across it.”

Catalase counteracts the effects of free radicals, destructive molecules that are byproducts of cellular activity and especially prevalent in areas of chronic inflammation.

“Catalase is one of the most potent antioxidants in nature,” Batrakova says. “One molecule of catalase can deactivate about one million free radicals per second, and it never stops because the enzyme is not consumed in the reaction. No small molecule drug even comes close to matching it in speed or efficiency.”

Traditional drugs — from cold medicine to chemotherapy — are composed of small molecules of a few dozen atoms, typically. Biopharmaceuticals, or biologics, are proteins produced by living cells. Proteins such as catalase are tens of thousands of times larger than the small molecules that make up traditional drugs.

Batrakova’s goal is to develop personalized treatments by loading proteins into exosomes that have been extracted from a patient’s own white blood cells. These packages of medicine will be ignored by the patient’s immune system, which works against unknown proteins as well as many synthetic delivery vehicles.

And what’s the best way of getting her drug-packed exosomes to the brain? It looks like a simple nasal spray will do the trick, Batrakova says.