from the Albuquerque Journal by Kevin Robinson-Avila

ExoVita Biosciences Inc. is less than a year old, but the Albuquerque startup is already topping a national list of the “most exciting” technology spinoffs from university research across the country. 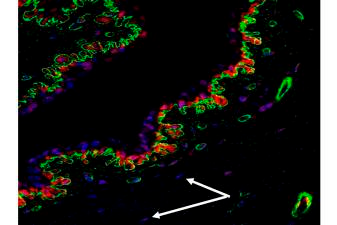 The group of blue cells indicated by the arrows are called fiber glass. That type of cell is what produces the exosomes that ExoVita is studying for its cancer-killing properties.

The firm, which is developing breakthrough technology from the University of New Mexico that harnesses the body’s own immune system to fight cancer, was included this month in a top ten list of recent university startups countrywide with the most potential to grow and impact society. The list was compiled by consulting firm Venture Radar in cooperation with its data partner, Startup.Directory.

The partners chose the top ten from more than 450 companies that formed in 2014 and 2015 based on research at U.S. universities, said Andrew Thompson of Venture Radar, which tracks tens of thousands of startups globally on behalf of corporate and other clients.

“Our aim was to pick out the companies that we felt had the highest potential to grow into the most valuable and impactful companies,” Thompson told the Journal in an email. “The type of criteria we were weighing up included factors such as quality of innovation, potential market and business model.”

ExoVita was chosen alongside other biomedical, materials, electronic and information technology startups from some of the nation’s most prestigious research universities, including Stanford, Harvard and the Massachusetts Institute of Technology, said John Chavez, president of the New Mexico Angels, which formed ExoVita last February through its Startup Factory incubator.

“It’s a nice list to be on,” Chavez said. “It shows that we have very cool stuff coming out of New Mexico and that we’re getting on to the map in the biotechnology and pharmaceutical industries.”

ExoVita’s technology is based on research by Kristina Trujillo, an assistant professor in the UNM Health Sciences’ Department of Cell Biology and Physiology. Trujillo helped discover cancer-killing properties in exosomes – tiny particles, or fluid-filled packets, that the body forms for cells to communicate with each other.

Since 2006, Trujillo has been researching tissue adjacent to tumors to determine the corroding impact of cancerous cells on surrounding tissue. That could help doctors to better determine how much tissue needs to be cut away in surgeries to prevent cancer recurrence, Trujillo said.

The research looked at tissue samples at one, three and five centimeters away from tumors, with the five-centimeter samples used as a base comparison for tissue cut from closer distances, since, at five centimeters, the cells are generally normal.

Trujillo and her group basically discovered the cancer-killing properties of exosomes by accident, Trujillo said.

“One day, we were looking at the exosomes from a specific cell population taken at five centimeters that we had put on cancer cells to see how they would react,” she said. “We didn’t expect it to do anything, but the next day we looked again and we couldn’t quantify the tumor cells because all the five-centimeter exosomes had killed the cancer cells. We thought it was an anomaly, so we repeated the experiment several times with different patients and always found the same results, leading us to hypothesize that the exosomes have toxic substances for tumor cells.”

The researchers continued to test the exosomes on noncancerous cells to determine if the tumor-killing properties might also damage normal tissue.

“The exosomes had shown that they were good for killing tumor cells, but if they also kill normal cells, then all we really have is poison,” Trujillo said. “But when we put them on the normal cells, those cells were perfectly happy – they didn’t die. So we realized we might have a highly selective, cyto-technology toxicity against the tumor cells.”

Since then, Trujillo’s team has tested the exosomes on many patients and found that they all have some amount of tumor cyto, or cell-based, toxicity, but it varies from patient to patient, with some exosomes demonstrating high levels of toxicity in killing tumors and others much less.

“Now, at ExoVita, we want to harness exosomes with the highest degree of toxicity, replicate them and repackage them to use them as a potential therapeutic,” Trujillo said.

If successful, exosome-based therapies could help cancer patients by using a highly selective tumor-killing therapy that fights cancer cells, but does not damage normal cells, avoiding the secondary effects of traditional medicine such as chemotherapy.

Trujillo’s team had previously received about $425,000 in research grants from the American Cancer Society and the National Cancer Institute. In June, the latter awarded a five-year, $1.7 million grant to continue studying the exosomes.

“We’re now in the process of breaking open exosomes and comparing the ones with the highest, medium-level and non-toxicities while identifying what’s in the exosomes that cause this to happen,” Trujillo said. “Once we identify that, then we’ll package them into a synthetic exosome for therapies.”

ExoVita could be about five years away from having a prototype for human clinical trials. But Chavez and other investors believe the technology is already advanced enough to attract venture backing.

“We’re already out on the streets looking for our first investment,” Chavez said. “In this case, we’re not raising any seed or early-stage capital from angel investors as we normally do with our startups. We believe the technology is mature enough to directly approach the venture capital community.”