Expanding on Exosomes and Ectosomes in Cancer

Exosomes are tiny vesicles that are enriched in nucleic acids and proteins and released from cells. Originally considered to have no biologic significance, these nano-sized blebs are now considered to be mini-maps of their cells of origin, with physiological and pathologic relevance. In cancer, they have been implicated in the muddling of cell-to-cell communication and in the transfer of “undesirable” information from one cell to another. Consequences include stimulating the proliferation, motility, and invasive properties of the recipient cell, transferring drug resistance, inducing the formation of endothelial tubules (e.g., in angiogenesis), and attracting cancer cells to secondary sites within living organisms. That said, our understanding of exosomes is rudimentary.

Several recent studies provide further support to show that exosomes derived from cancer cells are dynamic mini-factories that actively contribute to the progression of disease. These studies have focused on the microRNA (miRNA) content of exosomes. 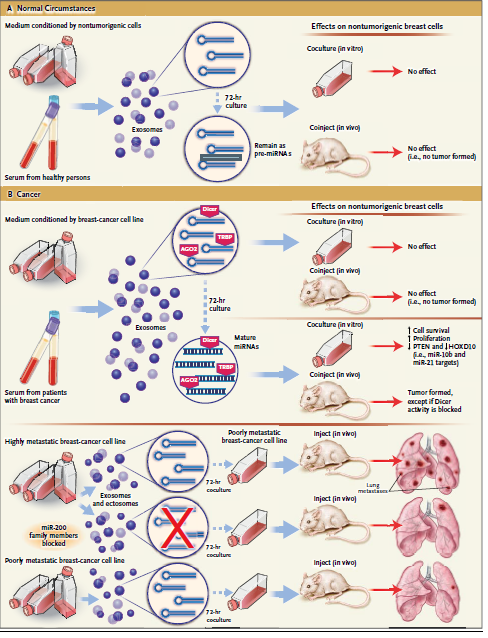 Exosomes are released into the surrounding medium (conditioned medium) by cells in culture and are also found in serum specimens. Melo et al.1 found that exosomes in the serum specimens from healthy persons carry immature precursor microRNAs (pre-miRNAs), which remain as pre-miRNAs even when the exosomes are cultured under laboratory conditions for 3 days. When such exosomes were cocultured with nontumorigenic cells or coinjected with these cells into mice, Melo et al. observed no notable effects (Panel A). Serum specimens from patients with cancer contain substantially more exosomes than do serum specimens from healthy controls. These exosomes are enriched in pre-miRNAs, as compared with the exosomes from normal cells, and, unlike exosomes from normal cells, they also have molecular machinery (in the form of the Dicer enzyme, the transactivating response RNA-binding protein [TRBP], and the argonaute 2 [AGO2] protein) that can convert pre-miRNAs to mature miRNAs while in culture. After coculture of these exosomes with nontumorigenic cells for 3 days, the cells showed increased survival and growth rate, with an associated reduction in the proteins PTEN (encoded by a tumor-suppressor gene) and HOXD10 (a transcription factor), which are known targets of the miRNAs miR-10b and miR-21. When these exosomes were coinjected with nontumorigenic cells into mice, the cells formed tumors, unless the activity of Dicer in the exosomes was blocked. Exosomes and ectosomes, collectively termed extracellular vesicles, from highly metastatic cells transfer this trait to poorly metastatic cells, causing a substantial increase in metastasis to the lungs, except when the activity of miR-200 is blocked in the extracellular vesicles, in which case fewer and small metastases result (Panel B).