Aging-related cognitive decline is an early symptom of Alzheimer’s disease and other dementias, and on its own can have substantial consequences on an individual’s ability to perform important everyday functions. Despite increasing interest in the potential roles of extracellular microRNAs (miRNAs) in central nervous system (CNS) pathologies, there has been little research on extracellular miRNAs in early stages of cognitive decline.

In a new study, a team led by researchers at the Columbia University Mailman School of Public Health leveraged the longitudinal Normative Aging Study (NAS) cohort to investigate associations between plasma miRNAs and cognitive function among cognitively normal men. 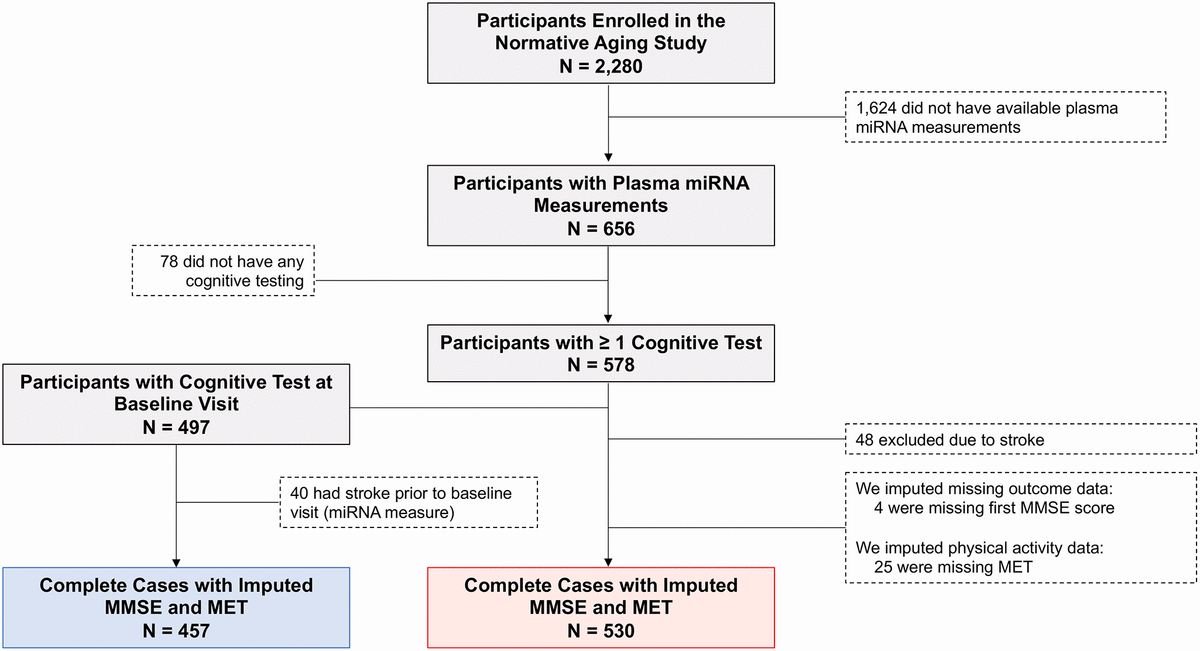 N = 530 subjects (red box) were included in the analysis of MMSE trajectory. N = 457 of these subjects (blue box) had MMSE assessed at the same visit as the plasma miRNA measure and were included in an additional cross-sectional analysis. Abbreviations: MMSE: Mini-Mental State Examination; MET: Metabolic equivalent of task, measured in hours/week. One MET is defined as the energy expenditure for sitting quietly, which, for the average adult, approximates 3.5 mL of oxygen uptake per kilogram of body weight per minute (1.2 kcal/min for a 70-kg individual).

“In a cohort of older men from Massachusetts, we investigated associations between plasma miRNAs and global cognition and rate of global cognitive decline measured by the MMSE.”

This study includes data from up to 530 NAS participants (median age: 71.0 years) collected from 1996 to 2013, with a total of 1,331 person-visits (equal to 2,471 years of follow up). Global cognitive function was assessed using the Mini-Mental State Examination (MMSE). Plasma miRNAs were profiled using small RNA sequencing. Associations of expression of 381 miRNAs with current cognitive function and rate of change in cognitive function were assessed using linear regression (N = 457) and linear mixed models (N = 530), respectively.

“Circulating miRNAs were associated with both cross-sectional cognitive function and rate of change in cognitive function among cognitively normal men. Further research is needed to elucidate the potential functions of these miRNAs in the CNS and investigate relationships with other neurological outcomes.”