Hypoxic acute kidney injury, a major unresolved problem, initiates, or aggravates, renal functional and structural decline. There is no treatment for hypoxic acute renal injury and its sequelae. Researchers from the Indiana University School of Medicine tested the hypothesis that human kidney tubular cells, or their extracellular vesicles (exosomes), prevent renal injury when infused intravenously 24 hours after 50 minutes of bilateral renal ischemia in Nude rats. Cells and their exosomes were from harvested human kidneys declined for transplantation. Injections of either cells or exosomes, given after 24 and 48 hours of reperfusion, preserved renal function and structure in both treatment groups. However, exosomes were superior to cells; and maintained renal vascular and epithelial networks, prevented renal oxidant stress, and apoptosis; and restrained activation of pro-inflammatory and pro-fibrogenic pathways. Exosomes worked in 24 hours, consistent with functional rather than regenerative activity. Comprehensive proteomic analysis identified 6152 renal proteins from all cellular compartments; and 628 were altered by ischemia at all cell levels, while 377 were significantly improved by exosome infusions. The researchers conclude that renal damage from severe ischemia was broad, and human renal exosomes prevented most protein alterations. Thus, exosomes seem to acutely correct a critical and consequential abnormality during reperfusion. In their absence, renal structure and cells transition to a chronic state of fibrosis and extensive renal cell loss. 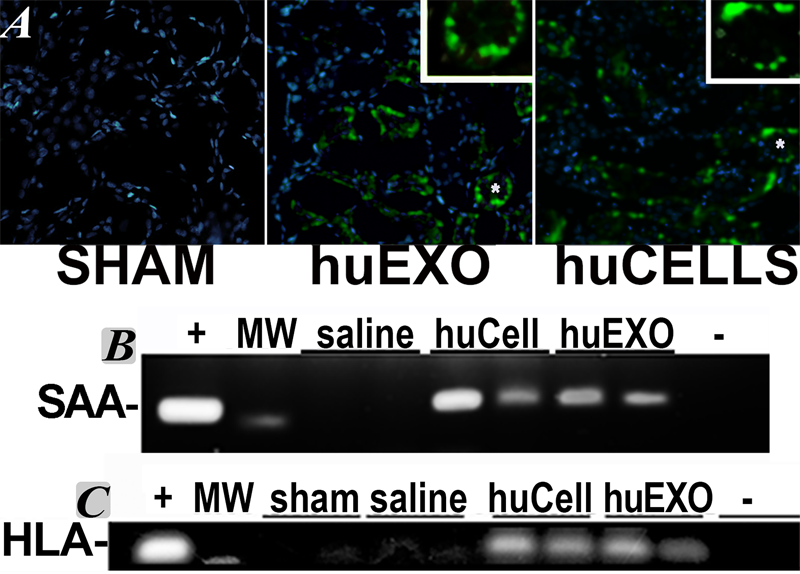