The discovery that all cells secrete extracellular vesicles (EVs) to shuttle proteins and nucleic acids to recipient cells suggested they play an important role in intercellular communication. EVs are widely distributed in many body fluids, including blood, cerebrospinal fluid, urine and saliva. Exosomes are nano-sized EVs of endosomal origin that regulate many pathophysiological processes including immune responses, inflammation, tumour growth, and infection. Healthy individuals release exosomes with a cargo of different RNA, DNA, and protein contents into the circulation, which can be measured non-invasively as biomarkers of healthy and diseased states. Cancer-derived exosomes carry a unique set of DNA, RNA, protein and lipid reflecting the stage of tumour progression, and may serve as diagnostic and prognostic biomarkers for various cancers. However, many gaps in knowledge and technical challenges in EVs and extracellular RNA (exRNA) biology, such as mechanisms of EV biogenesis and uptake, exRNA cargo selection, and exRNA detection remain. The NIH Common Fund-supported exRNA Communication Consortium was launched in 2013 to address major scientific challenges in this field. Researchers from the National Center for Advancing Translational Sciences discuss scientific highlights in biomarker discovery of exosome-based exRNA in cancer and its possible clinical application as cancer biomarkers.

A schematic diagram showing the biogenesis pathway of microvesicles and exosomes

Microvesicles are formed by direct budding from the plasma membrane and are capable of encapsulating multiple forms of molecular cargo including proteins and nucleic acids. The biogenesis of exosomes begins with internalization of the cell membrane leading to the formation of early endosomes. Intraluminal vesicles (ILVs) are formed by the inward invagination of endosomal membranes, resulting in the formation of multivesicular bodies (MVBs). During this process, cytosolic constituents, including nucleic acids and proteins, can be sorted into ILVs. Upon fusion of MVBs with the plasma membrane, ILVs are released as exosomes into the extracellular milieu. Exosomes can include many different types of exRNA; ER: endoplasmic reticulum; MLV: multivesicular body; ILV: intraluminal vesicle; miRNA: microRNA; piRNA: piwi-interacting RNA; tRF: tRNA-derived RNA fragments; snoRNA: small nucleolar RNA; lncRNA: long non-coding RNA 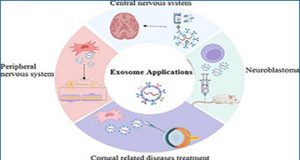