Extracellular vesicles as transmitters of hypoxia tolerance in solid cancers 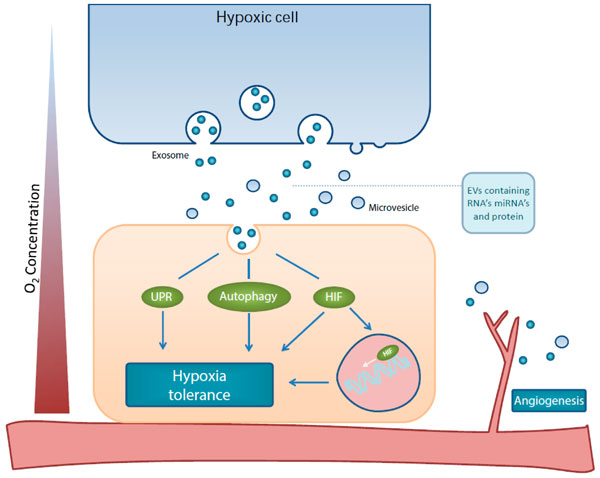 Tumour hypoxia is a common feature of solid tumours that contributes to poor prognosis after treatment. This is mainly due to increased resistance of hypoxic cells to radio- and chemotherapy and the association of hypoxic cells with increased metastasis development. It is therefore not surprising that an increased hypoxic tumour fraction is associated with poor patient survival. The extent of hypoxia within a tumour is influenced by the tolerance of individual tumor cells to hypoxia, a feature that differs considerably between tumors. High numbers of hypoxic cells may, therefore, be a direct consequence of enhanced cellular capability inactivation of hypoxia tolerance mechanisms. These include HIF-1α signaling, the unfolded protein response (UPR) and autophagy to prevent hypoxia-induced cell death. Recent evidence shows hypoxia tolerance can be modulated by distant cells that have experienced episodes of hypoxia and is mediated by the systemic release of factors, such as extracellular vesicles (EV). Researchers from Maastricht University discuss the evidence for transfer of a hypoxia tolerance phenotype between tumour cells via EV. In particular, proteins, mRNA and microRNA enriched in EV, derived from hypoxic cells, that impact HIF-1α-, UPR-, angiogenesis- and autophagy signalling cascades are listed.