Researchers from Exosome Diagnostics show that tumor- derived RNA was not detected in thrombocytes in samples where the tumor RNA was readily detected in exosomes. This finding holds significant implications for developers of liquid biopsies for cancer.

The results from this study raise doubts about the commonly held belief that platelets include abundant tumor RNA that can be used for tumor specific RNA analysis, a process named Tumor Educated Platelets (TEPs). This has important implications for the use of platelets as a potential technology platform for liquid biopsies that aim to detect or monitor molecules of tumor origin in a biofluid sample. Such platelet-based strategies have recently been proposed by other companies and academic labs in the field.

“We wanted to find the most sensitive way to detect tumor specific RNA and were looking for ways to increase our clinical sensitivity. In light of previous publications on TEPs, we isolated RNA from exosomes as well as platelets from the same samples in hopes of improving the detection. We learned that combining the sample gave more RNA, but actually decreased the sensitivity for mutation assays,” said Dr. Johan Skog, Chief Scientific Officer at Exosome Diagnostics, a Bio-Techne brand. “This finding led to this study quantifying the amount of tumor specific RNA in the platelets, if any, compared to other normal RNA”. The researchers in this study applied a sensitive mutation assay but were unable to detect any tumor RNA in the platelet fraction, even when it was readily detected in the exosome fraction from the same sample. This casts doubt that keeping the platelet fraction adds value when looking at single nucleotide mutations on RNA. “There is plenty of RNA in platelets,” continued Dr. Skog, “far more than in exosomes… but it does not come from the tumor.”

In this carefully executed study, involving prospective collection of blood samples from patients with melanoma, whose tumor tissue had been confirmed to carry the BRAF V600E mutation, the researchers directly compared the RNA mutation signals detectable in exosomes to platelets isolated from the same blood sample. Using an exceptionally sensitive assay for detection of the BRAF V600E RNA, the mutation could be detected in 10 out of 12 exosome fractions, but not in a single platelet preparation. The researchers conclude in the article, that based on their findings, the differences in platelet RNA expression, previously published between cancer patients and normal healthy controls are unlikely to be of tumor origin. The researchers further conclude that as a consequence of their findings, it is recommended for most cases to remove platelets from a blood specimen for optimal detection of tumor-derived RNA in extracellular vesicles. 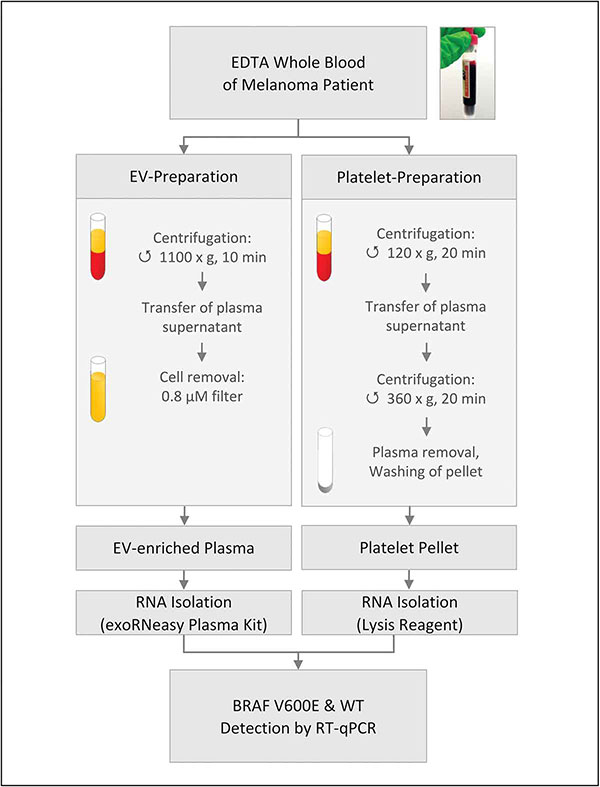