Extracellular vesicles (EVs) can be classified into apoptotic bodies, microvesicles (MVs), and exosomes, based on their origin or size. Exosomes are the smallest and best characterized vesicles which derived from the endosomal system. These vesicles are released from many different cell types including neuronal cells and their functions in the nervous system are investigated. They have been proposed as novel means for intercellular communication, which takes part not only to the normal neuronal physiology but also to the transmission of pathogenic proteins. Indeed, exosomes are fundamental to assemble and transport proteins during development, but they can also transfer neurotoxic misfolded proteins in pathogenesis. Researchers from the University of Pisa discuss their roles in neurological diseases, specifically brain tumors, such as glioblastoma (GBM), neuroblastoma (NB), medulloblastoma (MB), and metastatic brain tumors and chronic neurodegenerative diseases, such as Alzheimer, Parkinson, multiple sclerosis (MS), amyotrophic lateral sclerosis (ALS), Huntington, and Prion diseseases highlighting their involvement in spreading neurotoxicity, in therapeutics, and in pathogenesis. 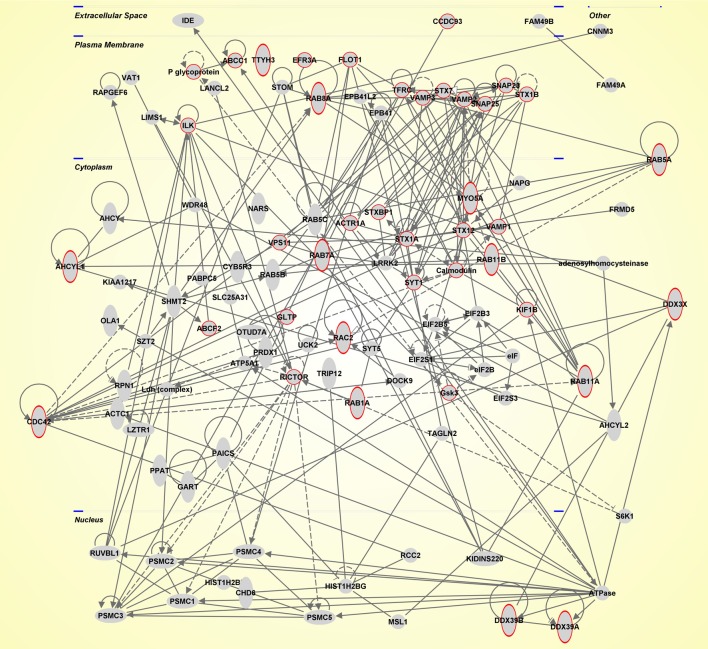 Network suggested by QIAGEN’s Ingenuity Pathway Analysis for the molecules identified in EVs, by focusing on the SNC, that were present in databases. The network is depicted with the subcellular layout. Red circles highlight the top function linked with the network: “secretory pathway” (p-value 3.4e−14).