Telocytes have been reported to play an important role in long-distance heterocellular communication in normal and diseased heart, both through direct contact (atypical junctions), as well as by releasing extracellular vesicles (EVs) which may act as paracrine mediators. Exosomes and ectosomes are the two main types of EVs, as classified by size and the mechanism of biogenesis. Using electron microscopy (EM) and electron tomography (ET) researchers at the Victor Babeș National Institute of Pathology have found that telocytes in culture release at least three types of EVs: exosomes (released from endosomes; 45 ± 8 nm), ectosomes (which bud directly from the plasma membrane; 128 ± 28 nm) and multivesicular cargos (MVC; 1 ± 0.4 μm), the latter containing tightly packaged endomembrane-bound vesicles (145 ± 35 nm). Electron tomography revealed that endomembrane vesicles are released into the extracellular space as a cargo enclosed by plasma membranes (estimated area of up to 3 μm2 ). This new type of EV, also released by telocytes in tissue, likely represents an essential component in the paracrine secretion of telocytes and may consequently be directly involved in heart physiology and regeneration. 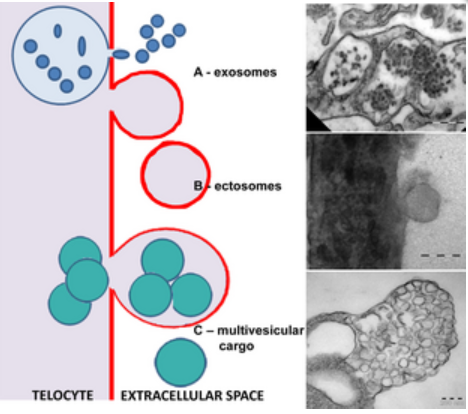 Schematic representation of the 3 types of extracellular vesicles released by telocytes and correspondent electron microscopy images of exosomes, ectosomes and multivesicular cargos.