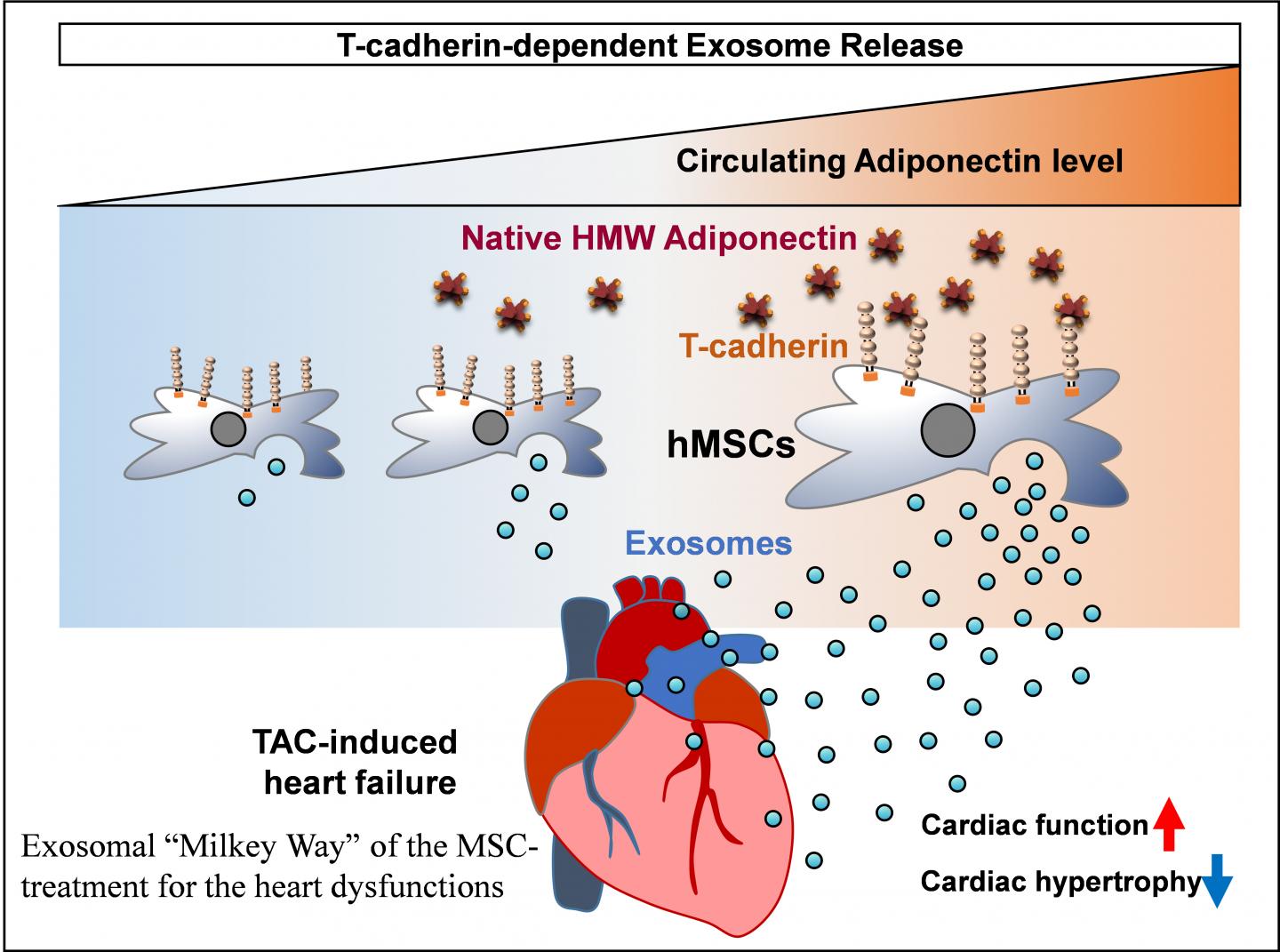 A team of researchers led by Osaka University find that adiponectin, a hormone derived from fat cells, improves the efficacy of mesenchymal stem cell-based treatment of heart failure

Mesenchymal stem cells (MSCs) have the potential to differentiate into a range of different cell types, including bone, fat, and muscle cells. But it’s their ability to stimulate the repair of damaged tissue that has captured the interest of researchers worldwide, with MSCs demonstrating therapeutic effects in the treatment of conditions such as heart disease, liver cirrhosis, and diabetes.

However, despite the success of several clinical trials, researchers have struggled to explain the sometimes variable results of MSC therapy.

In a recent study published in Molecular Therapy, a research team led by Osaka University investigated possible reasons for the inconsistent outcomes of MSC therapy, showing that host factors and not just the MSCs themselves may be to blame.

“We recently reported that adiponectin, a beneficial hormone secreted by fat cells that plays a role in muscle regeneration, binds to receptor protein T-cadherin on cell surfaces,” explains lead author Yuto Nakamura. “Given that T-cadherin is abundant on the surfaces of MSCs, we investigated whether adiponectin is involved in the regenerative activity of MSCs in a model of heart failure.”

Adiponectin is found in high concentrations in blood and has been shown to stimulate the production of exosomes, small membrane-bound vesicles that carry proteins, lipids, and DNA between cells. Interestingly, exosomes secreted by stem cells carry signals that stimulate the repair of recipient cells.

By first measuring exosome production in a cell culture-based system, the researchers confirmed that increasing amounts of adiponectin led to a corresponding increase in the abundance of MSC-derived exosomes, which was reliant on the expression of T-cadherin.

Injection of the MSCs into mice suffering from heart failure resulted in a significant improvement in left ventricular cardiac function, which was associated with the increased number of exosomes in circulation. Most importantly though, cardiac function following MSC therapy could be further strengthened by the increases of adiponectin level in blood.

“Together, our assays showed that MSCs exert their therapeutic effects on cardiac function through the production of exosomes, which is influenced by host plasma adiponectin levels and is reliant on MSC T-cadherin expression,” says study corresponding author Shunbun Kita.

“Given these results, drugs such as a PPARγ agonists, which increase adiponectin production, could be administered in combination with MSC therapy to significantly enhance the therapeutic potential–not only for severe heart failure, but also for a variety of diseases involving tissue damage, including COVID-19-associated acute respiratory distress syndrome.”

And in case you were wondering, it turns out that too much fat is actually detrimental to adiponectin production, so doctors won’t be prescribing a high fat diet any time soon!