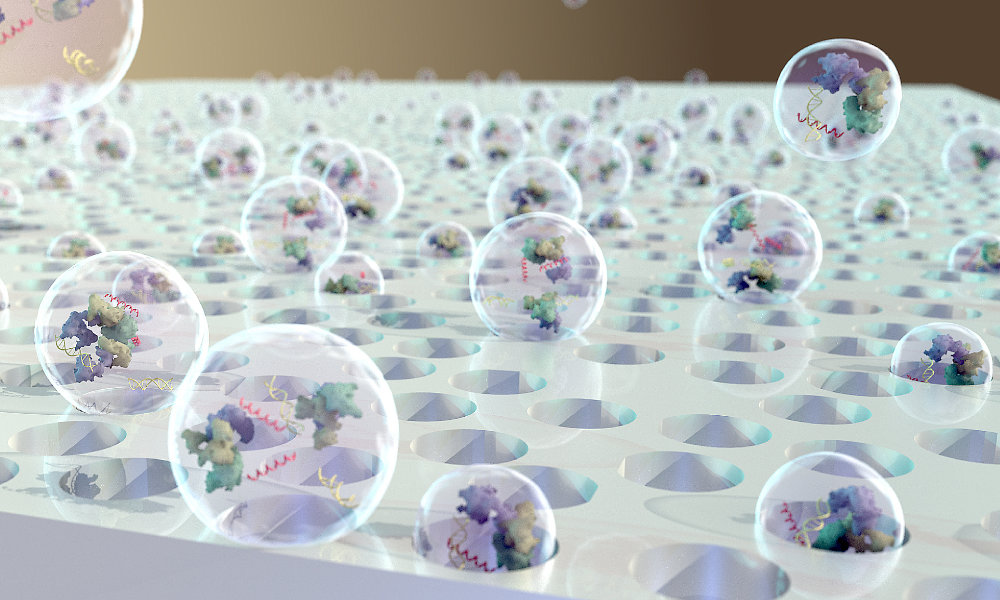 A nanomembrane developed by the McGrath Lab is able to capture individual extracellular vesicles, which allowed University of Chicago researchers to study their functionality. (Illustration: Bradley Kwarta at Rochester Institute of Technology)

Researchers from the University of Rochester and University of Chicago teamed up for one of the first known projects to successfully isolate and study extracellular vesicles (EVs).

Extracellular vesicles are tiny particles—as small as 40 nanometers in diameter—released by cells into the bloodstream and other fluid-filled cavities. EVs carry proteins, lipids, metabolites, and genetic material unique to the cells that release them. As a result, they could serve as valuable biomarkers for the early detection of diseases, including cancer—especially if single EVs could be assessed individually.

To this end, the researchers adapted nanomembranes from the lab of James McGrath, a professor of biomedical engineering at the University of Rochester, in a microfluidic cross-flow filtration system to capture and study individual EVs. Their findings appear in Communications Biology.

“If the vesicles carried important genetic material, you’d want a fairly stable pH in that environment,” says Deborah Nelson, a professor of pharmacological and physiological sciences at Chicago. “So, we wanted to ask a basic question: Are there proteins in the vesicle surface that could be responsible for maintaining a stable pH environment in the inside of the vesicle?”

Once the researchers were able to stabilize the vesicles on a membrane in the filtration system, they could look at them with a powerful microscope and measure changes in the vesicles’ pH levels over time or in response to changes in the solution. As a result, Nelson and Vladimir Riazanski, a research associate professor in her lab, discovered that the EVs have a transporter protein on their surface called a sodium hydrogen exchanger, common to all epithelial cells.

“Once you have a mechanical platform that allows you to study function in a quantitative way, now we can look at how you might be able to recognize altered EVs and isolate certain subsets of the population,” Nelson says. “This was a first foray into understanding their functions at the single vesicle level.”

A microfluidic cross-flow filtration system like the one used to capture individual extracellular vesicles, mounted on the platform of a high-powered microscope. (Image courtesy of McGrath Lab)

Catch EVs as you can

McGrath’s lab has pioneered the development of ultrathin membranes—just 100 nanometers thick—that are made from silicon nitride. The membranes contain billions of tiny pores, which can capture EVs and other tiny particles in microfluidics devices that circulate different fluids around the particles in a controlled manner and measure the responses.

“We’re particularly interested in the diagnostic potential of extracellular vesicles,” McGrath says. “Because tumor cells shed them abundantly, long before you ever manifest symptoms, these small clues are floating in your bloodstream as potential biomarkers. Our materials have the ability to catch and isolate individual EVs because the membrane pores and EVs are about the same size.”

McGrath is excited that the collaboration resulted in a groundbreaking application for the membranes.

“Anytime our materials help a collaborator do first-of-a-kind science, it’s a big deal,” McGrath says. “This paper uses our materials to reveal an important detail in biology that has never been seen before.”

Produced by all types of cells in the body, EVs were originally thought to be like little garbage bags, carrying away junk from the cells. However, as researchers learned more, they began to see evidence that EVs affect cells around them by binding to receptors, initiating signal pathways, and even traveling over a distance to a target cell—which some researchers believe could play a role in cancer metastasis. And yet, a better understanding of extracellular vesicle functionality means that some of these same processes could eventually be harnessed to deliver targeted cancer-fighting therapies and drugs.