Targeting exosome biogenesis and release may have potential clinical implications for cancer therapy. Researchers at Tulane University School of Medicine have optimized a quantitative high throughput screen (qHTS) assay to identify compounds that modulate exosome biogenesis and/or release by aggressive prostate cancer (PCa) CD63-GFP-expressing C4-2B cells. A total of 4,580 compounds were screened from the LOPAC library (a collection of 1,280 pharmacologically active compounds) and the NPC library (NCGC collection of 3,300 compounds approved for clinical use). Twenty-two compounds were found to be either potent activators or inhibitors of intracellular GFP signal in the CD63-GFP-expressing C4-2B cells. The activity of lead compounds in modulating the secretion of exosomes was validated by a tunable resistive pulse sensing (TRPS) system (qNano-IZON) and flow cytometry. The mechanism of action of the lead compounds in modulating exosome biogenesis and/or secretion were delineated by immunoblot analysis of protein markers of the endosomal sorting complex required for transport (ESCRT)-dependent and ESCRT-independent pathways. The lead compounds tipifarnib, neticonazole, climbazole, ketoconazole, and triademenol were validated as potent inhibitors and sitafloxacin, forskolin, SB218795, fenoterol, nitrefazole and pentetrazol as activators of exosome biogenesis and/or secretion in PC cells. These findings implicate the potential utility of drug-repurposing as novel adjunct therapeutic strategies in advanced cancer. 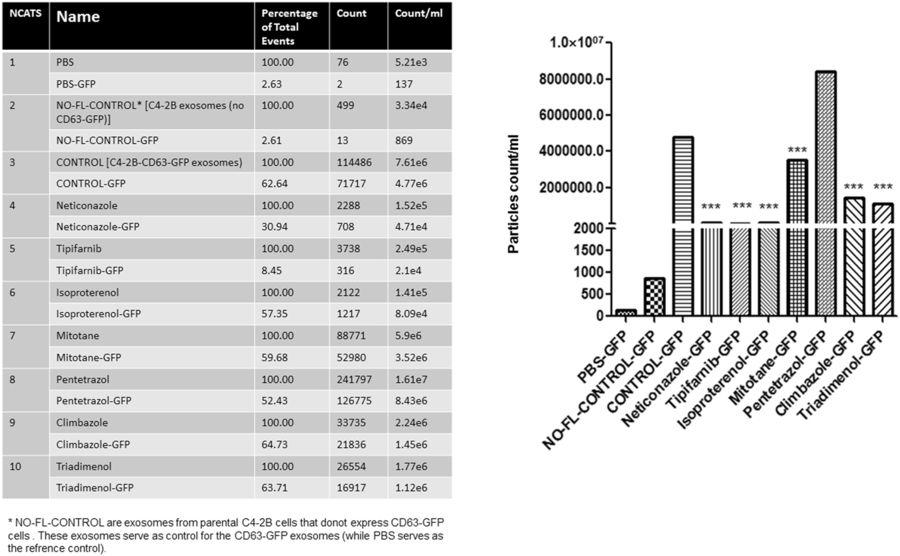 The exosomes in the conditioned media were isolated and analyzed by the MACSQuant Analyzer 10 Flow Cytometer as described in the “Materials and Methods” section. Treatments were at concentrations of 1 μM for neticonazole and tipifarnib and 10 μM for all other compounds. All the compounds identified as inhibitors using the qNano IZON were validated as potent inhibitors of exosome biogenesis by the MACSQuant, as well (except pentetrazol). The data is represented as the percentage of exosomes and has been normalized to the control sample (100%). Neticonazole (19%), tipifarnib (30%), isoproterenol (49.4%), mitotane (50.7%), pentetrazol (85%) and climbazole (88%) are potent inhibitors of exosome biogenesis. Three controls were used in this experiment. PBS without EVs was used as a reference control. The NO-FL-CONTROL are exosomes from parental C4-2B cells that did not express CD63-GFP cells. Exosomes from DMSO treated C4-2B-CD63-GFP is used as GFP control and PBS served as a reference control. Three samples determined to be activators of exosome biogenesis by the qNano-IZON were also tested by the MACSQuant Analyzer validated to be activators. ***Denotes significance at p < 0.05 compared to controls and was calculated using GraphPad Prism.