Sensitive and specific detection of tumor exosomes is of great significance for early cancer diagnosis. Researchers from Nanjing Normal University report an aptamer strategy for exosome detection based on aptamer recognition-induced multi-DNA release and cyclic enzymatic amplification. First, they use aptamer-magnetic bead bioconjugates to capture tumor exosomes derived from LNCaP cells, leading to the release of three kinds of messenger DNAs (mDNAs). After magnetic separation, the released mDNAs hybridized with the probe DNAs immobilized on a gold electrode. Electroactive Ru(NH3)63+ was used as the signal reporter because of its electrostatic attraction to DNA. Subsequent Exo III cyclic digestion caused the electrochemical signal to “turn off”. Since the electrochemical signal reflects the concentration of Ru(NH3)63+ and the concentration of Ru(NH3)63+ is correlated with the mDNA concentration, which is correlated with the exosome concentration, the tumor exosomes can be detected by examining the decrease in the peak current of Ru(NH3)63+. Here, the signal was amplified by the numerous mDNAs released from the magnetic bead and the Exo III-assisted mDNA recycling. Under the optimal conditions, a detection limit down to 70 particles/μL was achieved, which is lower than the LODs of most currently available methods. Furthermore, this assay can be used to detect tumor exosomes in complex biological samples, demonstrating potential application in real sample diagnosis.

Schematic illustration of the detection of tumor exosomes 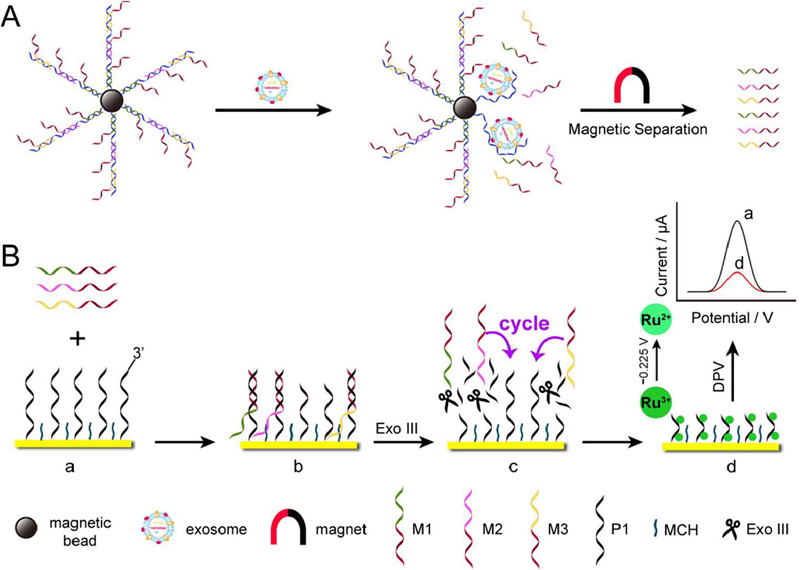 (A) Aptamers recognize and combine with exosomes and release mDNAs; (B) Detection the released mDNAs: (a) P1 modified gold electrode blocked with MCH, (b) Capture of mDNAs, (c) Treated with Exo III exonuclease, (d) DPV measurement in the electrochemical buffer.