A research team at LKS Faculty of Medicine, The University of Hong Kong (HKUMed) discovered that exosomes derived from γδ-T cells (γδ-T-Exos) synergised with radiotherapy can control nasopharyngeal carcinoma (NPC) by overcoming the radioresistance of NPC cancer stem cells (CSCs) and preserve their tumour-killing and T cell-promoting activities in the immunosuppressive NPC microenvironment. This study provides a proof of concept for a novel and potent strategy by combining γδ-T-Exos with radiotherapy in the control of NPC. The ground-breaking findings have been published in the leading academic journal, Journal for Immunotherapy of Cancer.

Nasopharyngeal carcinoma (NPC) is one of the most aggressive Epstein-Barr virus (EBV)-associated tumours, which are very prevalent in East Asia, including Hong Kong. Radiotherapy is the first-line treatment for NPC, but its therapeutic efficacy is poor in some patients due to radioresistance. Adoptive T cell-based immunotherapy has also shown promise to control NPC; however, its anti-tumour efficacy may be attenuated by an immunosuppressive tumour microenvironment. Exosomes are endosome-originated small extracellular vesicles that mediate intercellular communication. Compared with cell-based therapy, cell-free exosomes have advantages with higher safety, easier storage and lower costs. In a previous study, researchers have demonstrated that γδ-T-Exos could effectively control the progression of EBV-associated tumours. However, it remains unknown whether γδ-T-Exos have synergistic effect with radiotherapy and preserve their anti-tumour activities against NPC in an immunosuppressive tumour microenvironment.

‘Our study first provides a strong pre-clinical proof of concept using a novel therapeutic strategy by combining γδ-T-Exos with radiotherapy to treat NPC. γδ-T-Exos can effectively interact with and kill both EBV positive and negative NPC cells. More importantly, γδ-T-Exos can eradicate radioresistant NPC CSCs and preserve their tumour-killing and T cell-promoting activities in the immunosuppressive NPC microenvironment. Therefore, combination of radiotherapy with γδ-T- Exos has great potential in the treatment of NPC, which will be highly beneficial to the clinical application of this approach,’ said Professor Tu Wenwei of the Department of Paediatrics and Adolescent Medicine, School of Clinical Medicine, HKUMed, who led the research. 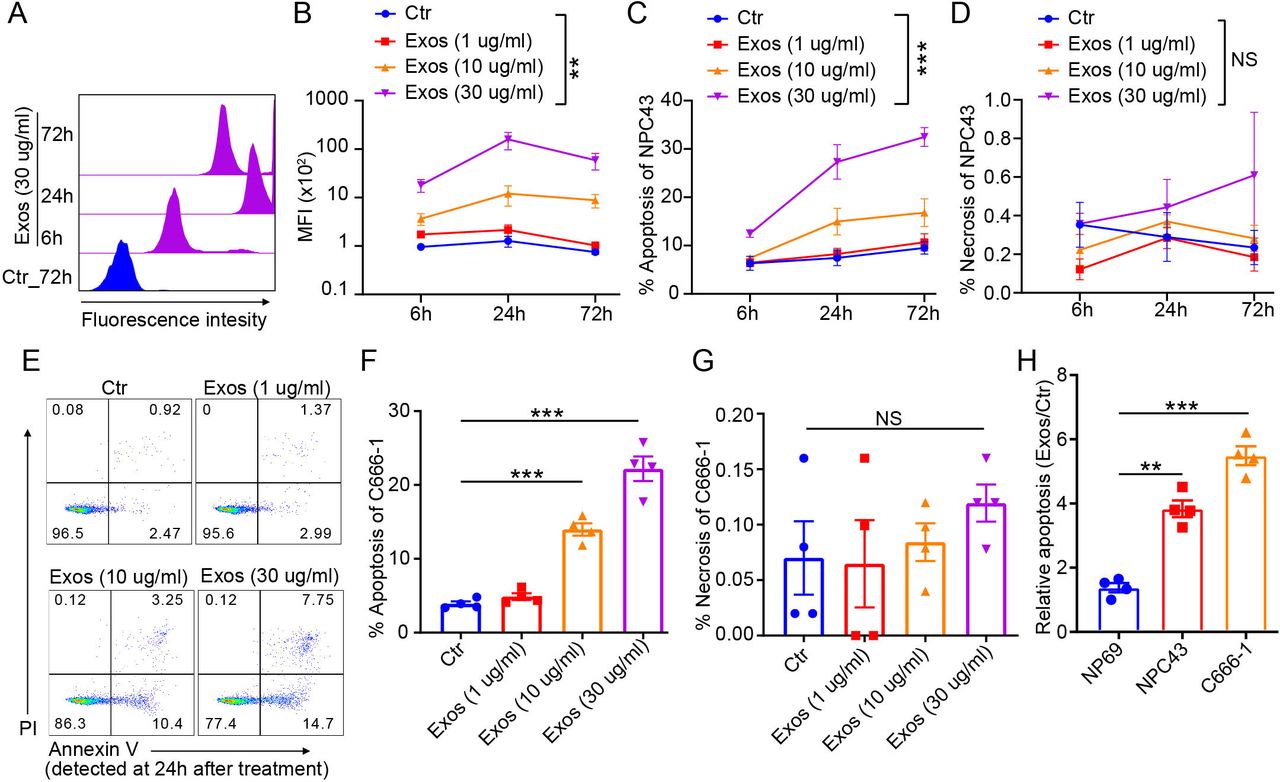 Significance of the study

The findings of the study have significant implications in cancer immunotherapy. Firstly, γδ-T-Exos interacted with CD44+/high NPC CSCs in high efficacy. Therefore, γδ-T-Exos can supplement radiotherapy and enhance its therapeutic efficacy against NPC. Secondly, γδ-T-Exos has advantages over other exosome-based therapies in combination with ionising irradiation in NPC therapy (e.g. MSC-Exos) by preserving anti-tumour activities in the immunosuppressive NPC microenvironment and are easier in preparation. Thirdly, the results that γδ-T-Exos expanded pre-existing tumour-specific T cells in the immunosuppressive NPC microenvironment can greatly enhance the clinical feasibility of γδ-T-Exos. Therefore, it is important for the combination therapy to possess immunostimulatory effects to boost anti-tumour immunity in the immunosuppressive NPC microenvironment.