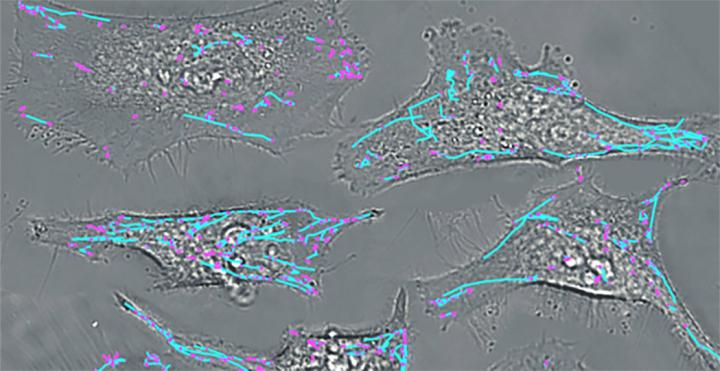 Holography is best known for its ability to produce 3D images (holograms) by recording an interference pattern of light scattered by an object with some reference wave. This simple optical experiment records the amplitude as well as the normally invisible phase of the underlying electric field. Once known, this information can be used to simultaneously localize many individual particles in all 3 dimensions.

In biology though holography is less common, as the most suitable technique, combining sensitivity, resolution and specificity, is fluorescence imaging which is widely used in live cell imaging. It would be fantastic if one could combine fluorescence microscopy with holography and thus retrieve the full 3D distribution of fluorescently labeled entities inside a cell. Unfortunately, fluorescence is incoherent, with a very short path-length and phase memory, complicating the creation of a reference wave for any fluorescence interference and hence holography.

Now holographic fluorescence imaging is presented by ICFO researchers Matz Liebel and Jaime Ortega-Arroyo, working the groups of ICREA professors at ICFO Niek van Hulst and Romain Quidant. They implemented a scheme that eliminates the need for a reference wave. Instead, they used the intrinsic phase information of each individual photon to access its phase via a technique called lateral shearing-interferometry. In essence, rather than directly measuring the phase they measured the position-dependent phase change in wide-field using a CMOS camera. Next, they computationally integrated this information to recover the full electric field of fluorescent light with single-molecule sensitivity. The novel scheme expands the principle of digital holography to fast fluorescent detection by eliminating the need for phase cycling and enables 3D-tracking of individual nanoparticles with an in-plane resolution of 15 nm and a z-range of 8 micrometer.

Liebel and Ortega-Arroyo then teamed up with the group of Hakho Lee at the Massachusetts General Hospital in Boston, to image and track the 3D motion of extracellular vesicles (EVs) inside live cells. They resolved both near-isotropic 3D diffusion as well as directional transport. Interestingly, for extended observation windows, they observed a transition toward anisotropic motion with the EVs being transported over long distances in the axial plane, confined in the horizontal dimension.

The fluorescence holography is directly compatible with present-day super-resolution modalities and equally well suited for other volumetric imaging challenges, such as tracking in tissue or calcium imaging. The work was recently published in Science Advances.