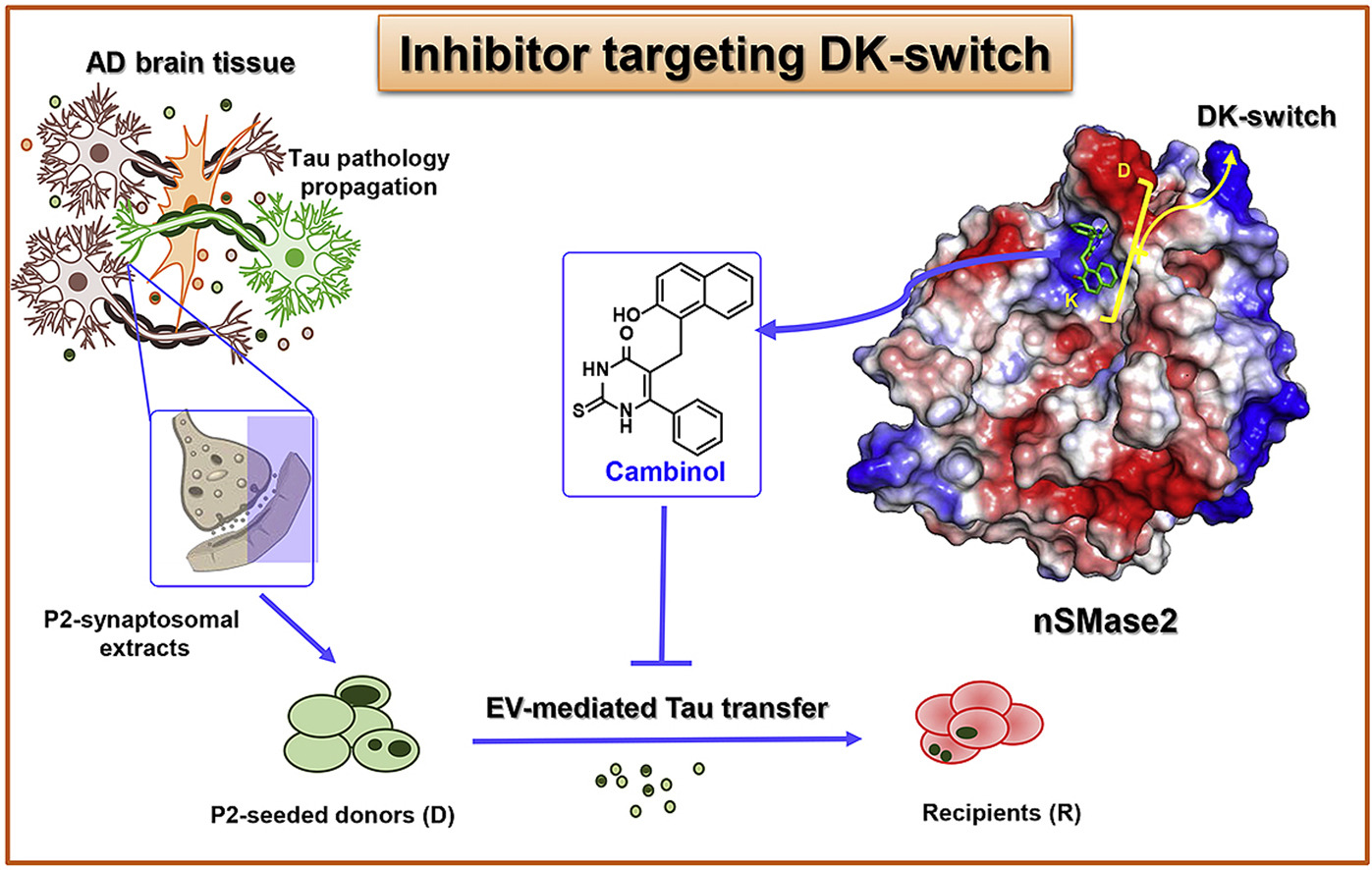 Alzheimer’s disease destroys brain cells in part by promoting the formation of insoluble clumps that contain a protein called tau. Not only are these “tau aggregates” toxic for the cells that harbor them, but they also invade and destroy neighboring brain cells, or neurons, which speeds the cognitive decline associated with the Alzheimer’s.

For those reasons, Alzheimer’s researchers have been intensely interested in therapies aimed at either preventing tau aggregation or blocking its spread.

Now, researchers at the UCLA School of Nursing and the department of neurology at the David Geffen School of Medicine at UCLA have reported a promising drug strategy that blocks tau transmission. The study was published online in the journal Biochemical and Biophysical Research Communications.

Using cultured cells, mouse models and protein structural analysis, the researchers found that a small molecule called cambinol blocks the transfer of tau aggregates from cell to cell. The study could help lay the groundwork for therapies to treat Alzheimer’s or other dementias associated with the accumulation of tau.

“Over 200 molecules have been tested as disease-modifying Alzheimer’s therapy in clinical trials, and none has yet attained the holy grail,” said Varghese John, a UCLA associate professor of neurology and the study’s senior author. “Our paper describes a novel approach to slow Alzheimer’s progression by showing it is possible to inhibit propagation of pathologic forms of tau.”

John is a member of the UCLA Easton Center for Alzheimer’s Disease Research and leads the Drug Discovery and Translational lab.

In healthy people, tau proteins are benign building blocks of a neuron’s framework, or cytoskeleton. But in Alzheimer’s disease, tau proteins fall away from the cytoskeleton, become abnormally modified, and then form insoluble “neurofibrillary tangles” that destroy cells. To make matters worse, dying cells encase tau aggregates in lipid vesicles called exosomes, which then bud off and “seed” neighboring tissues, keeping the destructive cycle going.

The researchers conducted several experiments that suggest that cambinol can subvert the “transfer” step by blocking an enzyme called nSMase2, which is essential for catalyzing production of the exosome carriers. In one, the scientists used “donor cells” that harbored tau aggregates derived from postmortem human Alzheimer’s specimens and mixed them with tau-free recipient cells.

Without cambinol, the aggregates spread from donors to recipients, mirroring what happens in the brains of people with Alzheimer’s. But when treated with cambinol, recipient cells remained tau-free when grown side by side with tau-positive donors, presumably because the drug disabled nSMase2 activity blocking release of the tau-carrying exosomes.

The researchers also observed decreased nSMase2 catalytic activity in the brains of mice that were given cambinol orally. John said the seemingly routine experiment was an essential first step.

“Getting molecules into the brain is a big hurdle, because most drugs don’t penetrate the blood-brain barrier,” he said, referring to the membranes that surround the central nervous system and keep drugs out of it. “Now we know we can treat animals with cambinol to determine its effect on Alzheimer’s pathology and progression.”

The paper is the first to report on a model of how cambinol switches off nSMase2 catalytic activity at the atomic level, and it provides critical knowledge for medicinal chemists like John to begin designing new drugs based on cambinol that are more potent and efficacious than the molecule itself. That work is already being done in collaboration with Neil Garg, a UCLA professor of chemistry and biochemistry. If the approach is successful in animals, it could be tested in clinical trials.

“Understanding pathways is the first step to new drug targets,” said Karen Gylys, a UCLA professor of nursing and a co-author of the study. “With cambinol in hand, we have a useful tool for understanding cellular pathways that enable the spread of tau pathology.”