How parasites take a bigger bite 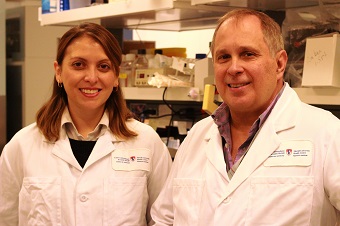 A team of international scientists led by Dr. Martin Olivier from the Research Institute of the McGill University Health Centre (RI-MUHC) uncovered an important mechanism behind Leishmania, a deadly parasitic disease transmitted by sandflies that affects over 12 million people worldwide, and with more than 1.3 million new cases reported every year. In a new study published today on the website Cell Reports, researchers described how key molecules known as exosomes, boost the process by which the Leishmania parasite infects humans and other mammals. These findings could lead to the development of new potential vaccine targets and diagnostic tools for Leishmania and other parasitic diseases.

“Our study reports the first observation that a pathogen within its insect vector can release extracellular vesicles or exosomes that are an integral part of the parasite’s infectious life cycle,’’ says study’s lead author Dr. Olivier, researcher from the Infectious Diseases and Immunity in Global Health Program of the RI-MUHC and a full professor of Medicine at McGill University. “This means that any bacteria and parasites transmitted via insect blood meals could use a similar strategy to extend their successful infection.’’

While the insect is eating its lunch…

Exosomes are small cell-derived vesicles that are present in many biological fluids, including blood, urine, saliva, etc. They have been the focus of numerous studies due to their involvement in communication between cells, especially immune and tumour cells. Despite the abundant knowledge obtained through studies using exosomes within in vitro experiments, Dr. Olivier’s team, with colleagues from the National Institutes of Health, is the first to describe, step-by-step, their formation and release in a living organism in relation to a specific infectious agent.

“By using electron microscopy and proteomic analysis, we discovered that the parasite was releasing exosomes within the gut of the female sandflies,’’ explains study’s first author Dr. Vanessa Diniz Atayde, who is a research associate in Dr. Olivier’s laboratory. “As the insect took a blood meal from its host, both exosomes and Leishmania were transmitted.’’

“We also found that by injecting the parasite with its exosomes in mice models, we were enhancing the pathogenicity of the parasite,” adds Dr. Olivier. “The inflammatory response, usually caused by an infection, and the number of parasites were increased.’’ 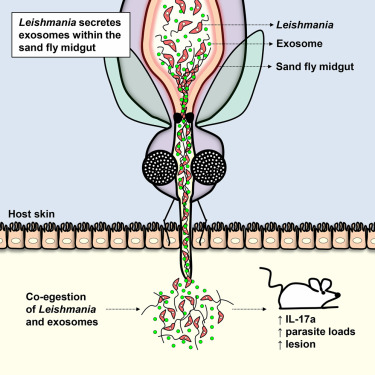 Leishmania is found in parts of the tropics, subtropics, and southern Europe and is transmitted through the bite of female phlebotomine sandflies. The parasites are injected in the skin and are ingested by immunity cells called macrophages, where they block their immune function and multiply, forming skin lesion and spreading to other tissues in the body depending on Leishmania species involved. This infectious disease can occur in cutaneous forms, which are generally curable, as well as in a more dangerous – and potentially fatal – visceral form. The World Health Organization estimates that 20,000 to 30,000 deaths are caused annually by Leishmania worldwide.

In North America, Leishmania is indigenous to México and Texas, but has begun to expand its range northward. Further expansion to the north may be facilitated by climate change as more habitat becomes suitable for insect vectors and reservoir species for the disease.

“These findings could open the door to the development of new vaccines targeting the exosome components by neutralizing its ability to boost infection, ’’says Dr. Olivier.  “Another interesting aspect of this study is that by studying the exosomes of other biting insects that suck blood, such as mosquitoes or black flies, we could develop anti-allergic therapy to tone-down developed skin inflammation in certain persons upon an insect bite. ’’

This study was funded by the Canadian Institutes of Health Research (CIHR).