Liquid biopsy-based biomarkers, such as microRNAs, represent valuable tools for patient management, but often do not make it to integration in the clinic. A team led by researchers at the Princess Máxima Center for Pediatric Oncology explored issues impeding this transition, in the setting of germ cell tumors, for which novel biomarkers are needed. They describe a model for identifying and validating clinically relevant microRNAs for germ cell tumor patients, using both in vitro, in vivo (mouse model) and patient-derived data. Initial wide screening of candidate microRNAs is performed, followed by targeted profiling of potentially relevant biomarkers. The researchers demonstrate the relevance of appropriate (negative) controls, experimental conditions (proliferation), and issues related to sample origin (serum, plasma, cerebral spinal fluid) and pre-analytical variables (hemolysis, contaminants, temperature), all of which could interfere with liquid biopsy-based studies and their conclusions. Finally, they show the value of our identification model in a specific scenario, contradicting the presumed role of miR-375 as marker of teratoma histology in liquid biopsy setting. These findings indicate other putative microRNAs (miR-885-5p, miR-448 and miR-197-3p) fulfilling this clinical need. The identification model is informative to identify the best candidate microRNAs to pursue in a clinical setting. 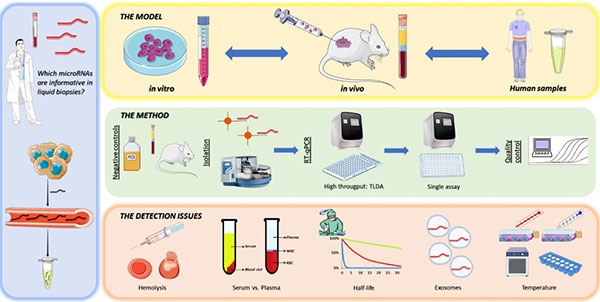 (left panel) MicroRNAs are secreted by tumor cells and released into the bloodstream, therefore they could possibly be detected in liquid biopsies; (upper panel) In order to predict which microRNAs are informative in liquid biopsies, a combined in vitro and in vivo identification model was set up. In vitro: cell lines + conditioned media. In vivo: xenograft mice + plasma samples. Human samples: patient cohort studies in serum/plasma/CSF; (middle panel) Methods used for identifying microRNAs. Appropriate negative controls should be used depending on the context: fetal calf serum, normal plasma/serum/CSF samples and normal mice. Bead-captured-based microRNA-isolation assures good results and is less troubled by detection issues such as hemolysis. High throughput strategies followed by targeted-assay validation are warranted. Analysis and quality control steps are crucial to assure reproducible results; (bottom panel) In parallel, there are several detection issues to take into account when identifying microRNAs. MicroRNA levels could be influenced by hemolysis, as they are released from ruptured erythrocytes. Differences between Ct values of specific target assays exist between serum and plasma, so mixed cohorts are troublesome. MicroRNAs should have a steady decrease after surgery rather than a fluctuating expression level over time. Exosomes are a major means of microRNAs secretion. Temperature could also possibly influence the dynamics of microRNA secretion, although it seems to be a rather stable process.