Improved blood stabilization should expand use of liquid biopsy

A new blood stabilization method, developed at the Massachusetts General Hospital Center for Engineering in Medicine (MGH-CEM), significantly prolongs the lifespan of blood samples for microfluidic sorting and transcriptome profiling of rare circulating tumor cells (CTCs), living cancer cells carried in the bloodstream. This work, which overcomes a significant barrier to the translation of liquid biopsy technologies for precision oncology and other applications, was recently published in Nature Communications.

The only FDA-approved blood stabilization method for CTC assays is chemical fixation, which kills the cells and heavily degrades sensitive biomolecules, especially RNA. “Chemically fixing the cells defeats the purpose of using them in clinically meaningful ways,” says lead author Keith Wong, PhD, of the MGH-CEM. “We need to be able to study the transcriptome of tumor cells to understand, for example, whether the tumor is turning certain molecular pathways on or off in response to treatments. Better yet, we want to culture these cells for personalized drug testing, and to do that we need live cells.”

When isolating these extremely fragile and rare cells from fresh, unprocessed blood, timing is everything. Even minor changes in the quality of a blood sample – such as the breakdown of red cells, leukocyte activation or clot formation – greatly affect cell-sorting mechanisms and the quality of the biomolecules isolated for cancer detection. According to published studies, important factors such as the total number of CTCs in a sample and the number with high-quality RNA decrease by around 50 percent within the first four to five hours after the sample is taken.

Wong explains, “At Mass. General, we have the luxury of being so integrated with the clinical team that we can process blood specimens in the lab typically within an hour or two after they are drawn. But to make these liquid biopsy technologies routine lab tests for the rest of the world, we need ways to keep blood alive for much longer than several hours, since these assays are best performed in central laboratories for reasons of cost effectiveness and reproducibility.”

The MGH team took a comprehensive approach that aims to preserve blood in its native state with minimal alterations. Co-lead author Shannon Tessier, PhD, of the MGH-CEM says, “We wanted to slow down the biological clock as much as possible by using hypothermia, but that is not as simple as it sounds. Low temperature is a powerful means to decrease metabolism, but a host of unwanted side effects occur at the same time. In some ways, these challenges are similar to those we face in organ preservation, where we have to optimize strategies for a very complex mix of cells.”

To achieve these goals, the team first systematically analyzed the storage conditions that optimally preserve the viability of the diverse cell types in whole blood. The biggest challenge, it turned out, was platelet activation. Wong explains, “We are preserving the blood very well, including the coagulation function of platelets. But unfortunately, cooling causes profound activation of platelets. Now we need a targeted approach for platelets so they don’t form nasty clots in the microfluidic blood sorting device.”

The team then analyzed a variety of antiplatelet agents and found that glycoprotein IIb/IIIa inhibitors, which are frequently used in cardiovascular medicine, were extremely effective in countering cooling-induced platelet aggregation. The team reports that using these strategies – in addition to a brief ion chelation treatment, which removes the activated, sticky platelets from leukocytes – allows whole blood preserved for three days to be processed as if it were freshly drawn, with very high purity and virtually no loss in the number of CTCs. 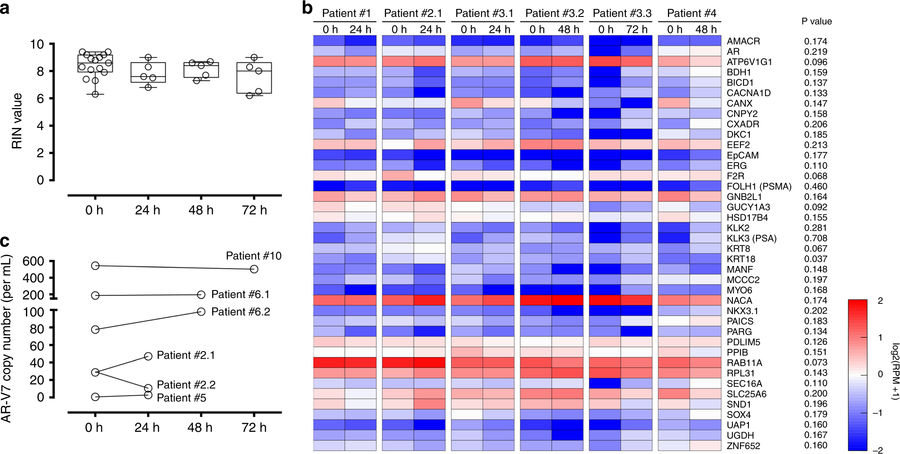 a RIN values of CTCs isolated from fresh and cold-stored blood (total 15 blood draws from 8 independent patients). b Scaled heatmap of log2-transformed normalized reads (RPMs) for four prostate cancer patients. For patient #3, data are available from three different draw dates stored for different durations (24, 48, and 72 h; denoted #3.1, #3.2, and #3.3, respectively). Statistical analysis comparing fresh vs. cold-stored blood (6 blood draws) found no significant differences in the mean RPMs for any of the 40 genes depicted in b, except for KRT18 (p = 0.037, paired t-test). c The mRNA copy number of AR-V7 detected by Droplet Digital PCR (expressed as per mL of blood processed). Box-and-whiskers plots show median, interquartile range, maxima, and minima

Tessier says, “The critical achievement here is that the isolated tumor cells contain high-quality RNA that is suitable for demanding molecular assays, such as single-cell qPCR, droplet digital PCR and RNA sequencing.”

Using blood specimens from a group of 10 patients with metastatic prostate cancer, the team compared the use of preserved blood against paired fresh samples from the same patients for CTC analysis. Overall, there was 92 percent agreement in the detection of 12 cancer-specific gene transcripts between the fresh and the preserved samples, and there was 100 percent agreement in the detection of a transcript called AR-V7. Recently published studies report that the presence of AR-V7 mRNA in prostate cancer CTCs predicts resistance to androgen receptor inhibitors, indicating that chemotherapy may be a better option for such patients.

“The ability to preserve the blood for several days and still be able to pick up this clinically relevant biomarker is remarkable,” says co-author David Miyamoto, MD, PhD, MGH Cancer Center. “This is very exciting for clinicians, because AR-V7 mRNA can only be detected using CTCs and not with circulating tumor DNA or other cell-free assays.”

The team highlights the universal nature of this stabilization approach by pointing to its compatibility with the highly demanding microfluidic CTC-iChip device, which isolates tumor cells by rapid removal of blood cells, implying the potential impact of this work extends beyond cancer detection. Wong says, “With exciting breakthroughs in immunotherapy, stem cell transplantation, and regenerative medicine – in which peripheral blood is often the source of cells for functional assays or ex vivo expansion – the ability to preserve live cells will greatly ease logistical timelines and reduce the cost of complex cell-based assays.”