Exosomes are natural nano-sized membrane vesicles that have garnered recent interest owing to their potential as drug delivery vehicles. Though exosomes are effective drug carriers, their production and in vivo biodistribution are still not completely elucidated. Researchers from Kyungpook National University analyzed the production of exosome mimetics (EMs) from red blood cells (RBCs) and the radio-labeling of the RBC-EMs for in vivo imaging. Engineered EMs from RBCs were produced in large-scale by a one-step extrusion method, and further purified by density-gradient centrifugation. RBC-EMs were labeled with technetium-99m (99mTc). For non-invasive imaging, 99mTc (free) or 99mTc-RBC-EMs were injected in mice, and their biodistribution was analyzed by gamma camera imaging. Animals were sacrificed, and organs were collected for further biodistribution analysis. RBC-EMs have similar characteristics as the RBC exosomes but have a 130-fold higher production yield in terms of particle numbers. Radiochemical purity of 99mTc-RBC-EMs was almost 100% till 2 h reduced to 97% at 3 h. Radio-labeling did not affect the size and morphology of RBC-EMs. In contrast to free 99mTc, in vivo imaging of 99mTc-RBC-EMs in mice showed higher uptake in the liver and spleen, and no uptake in the thyroid. Ex vivo imaging confirmed the in vivo findings. Furthermore, fluorescent imaging confirmed the nuclear imaging findings. Immunofluorescent imaging revealed that the hepatic uptake of RBC-EMs was significantly mediated by kupffer cells (resident hepatic macrophages). These results demonstrate a simple yet large-scale production method for a novel type of RBC-EMs, which can be effectively labeled with 99mTc, and feasibly monitored in vivo by nuclear imaging. The RBC-EMs may be used as in vivo drug delivery vehicles.

Sub-cellular visualization of RBC-EMs DiD in mice liver 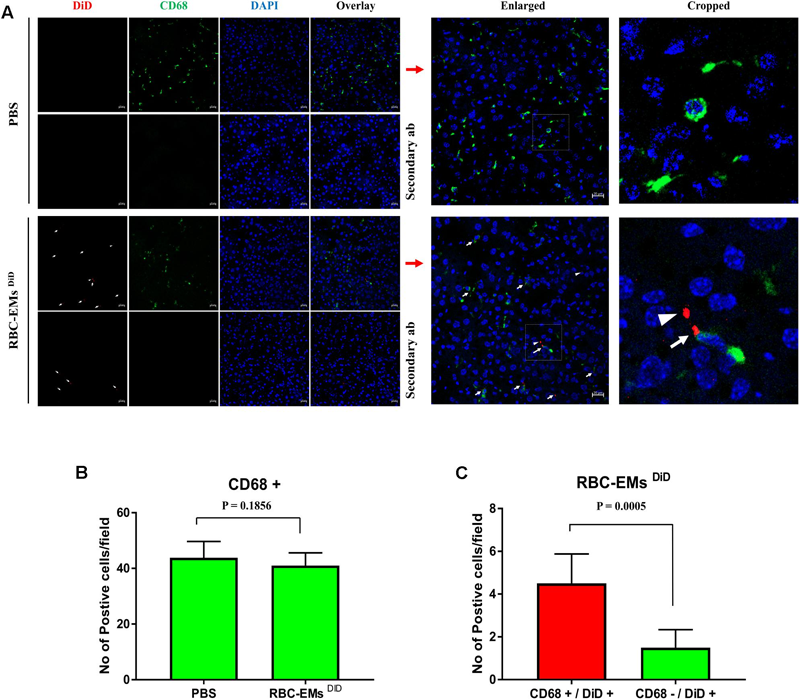