RNAi therapy has undergone two stages of development, direct injection of synthetic siRNAs and delivery with artificial vehicles or conjugated ligands; both have not solved the problem of efficient in vivo siRNA delivery. Nanjing University researchers present a proof-of-principle strategy that reprogrammes host liver with genetic circuits to direct the synthesis and self-assembly of siRNAs into secretory exosomes and facilitate the in vivo delivery of siRNAs through circulating exosomes. By combination of different genetic circuit modules, in vivo assembled siRNAs are systematically distributed to multiple tissues or targeted to specific tissues (e.g., brain), inducing potent target gene silencing in these tissues. The therapeutic value of our strategy is demonstrated by programmed silencing of critical targets associated with various diseases, including EGFR/KRAS in lung cancer, EGFR/TNC in glioblastoma and PTP1B in obesity. Overall, this strategy represents a next generation RNAi therapeutics, which makes RNAi therapy feasible.

Schematic description of the architecture of the genetic circuit 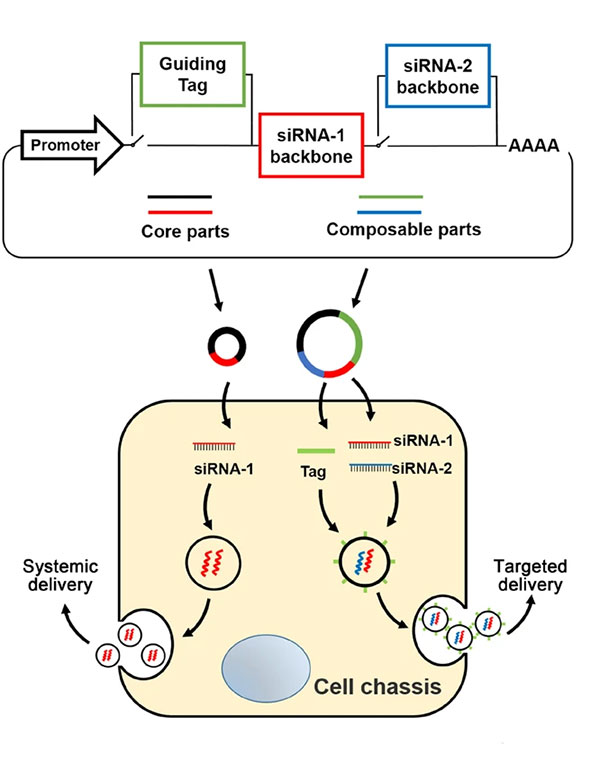 The core circuit contains a promoter part (black) and an siRNA-expressing part (red). When the core circuit is placed in a cell/tissue chassis, the promoter drives the transcription of the siRNA and directs the siRNA payload into exosomes. Two composable, plug-in parts are driven by the same promoter of the core circuit and incorporated into the core circuit structure: one encodes a guidance tag (green) that is anchored on the exosome surface to enable targeting of exosomes to cells and tissues, and the other part (blue) expresses a different tandem siRNA. The core circuit design facilitates the systematic distribution of siRNAs to multiple tissues, while the composable-core circuit increases the simultaneous accumulation of two siRNAs in specific tissues.