It has been well documented that alcohol and its metabolites induce injury and inflammation in the liver. However, there is no potential biomarker to monitor the extent of liver injury in alcoholic hepatitis patients. MicroRNAs (miRNAs) are a class of non-coding RNAs that are involved in various physiologic and pathologic processes. In the circulation, a great proportion of miRNAs is associated with extracellular vesicles (EVs)/exosomes.

Researchers from UMASS Medical School hypothesized that the exosome-associated miRNAs can be used as potential biomarkers in alcoholic hepatitis (AH). Exosomes were isolated from sera of alcohol-fed mice or pair-fed mice, and plasma of alcoholic hepatitis patients or healthy controls by ExoQuick. The exosomes were characterized by transmission electron microscopy and Western blot and enumerated with a Nanoparticle Tracking Analysis system.

Firefly microRNA Assay was performed on miRNA extracted from mice sera. TaqMan microRNA assay was used to identify differentially expressed miRNAs in plasma of cohort of patients with AH versus controls followed by construction of receiver operating characteristic (ROC) curves to determine the sensitivity and specificity of the candidates.

The researchers found that the total number of circulating EVs was significantly increased in mice after alcohol feeding. Those EVs mainly consisted of exosomes, the smaller size vesicle subpopulation of EVs. By performing microarray screening on exosomes, they found nine inflammatory miRNAs which were deregulated in sera of chronic alcohol-fed mice compared to controls including upregulated miRNAs. The ROC analyses indicated excellent diagnostic value of miRNA-192, miRNA-122, and miRNA-30a to identify alcohol-induced liver injury. We further validated findings from our animal model in human samples. 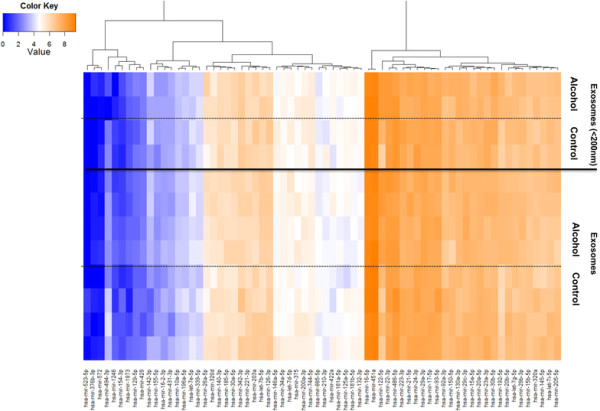 Elevated level of EVs/exosomes and exosome-associated miRNA signature could serve as potential diagnostic markers for AH. In addition to the biomarker diagnostic capabilities, these findings may facilitate development of novel strategies for diagnostics, monitoring, and therapeutics of AH.