Inside the race to diagnose cancer from a simple blood draw

from STAT News by Megan Scudellari

BOSTON — It’s a medical puzzle that has snagged the attention — and the money — of Bill Gates, Jeff Bezos, and venture capitalists across the nation: Is it possible to diagnose cancer from a simple blood draw?

Surgical biopsies are the norm, but they’re invasive, expensive, and carry the risk of infection. So investors have poured hundreds of millions into the goal of developing “liquid biopsies.”

There has been some progress: Blood analysis is now used to identify the best treatments for certain cancers — and to update treatments as the cancer mutates. But so far, no one has scored the ultimate success: diagnosing incipient cancer from a vial of blood drawn from a patient who looks and feels perfectly healthy.

Some 38 companies in the US alone are working on liquid biopsies. Most are trying to analyze blood for fragments of DNA shed by dying tumor cells.

In a lab overlooking Boston Harbor, an unlikely duo is taking a different path.

Mehmet Toner and Dr. Daniel Haber — a Turkish bioengineer and a Jewish geneticist — joined forces a decade ago, in a partnership forged over tuna sandwiches. While other scientists scan blood for scraps of tumor DNA, Toner and Haber filter out all the healthy components of the blood — then scoop up any whole tumor cells left behind.

The process is costly and time-consuming. And their peers mock it as hopelessly old school.

But Toner and Haber are undaunted. They’re convinced whole cells will give doctors valuable information about cancer. A fragment from a dying tumor cell, Haber said, “doesn’t tell me anything about the biology of the living tumor.” 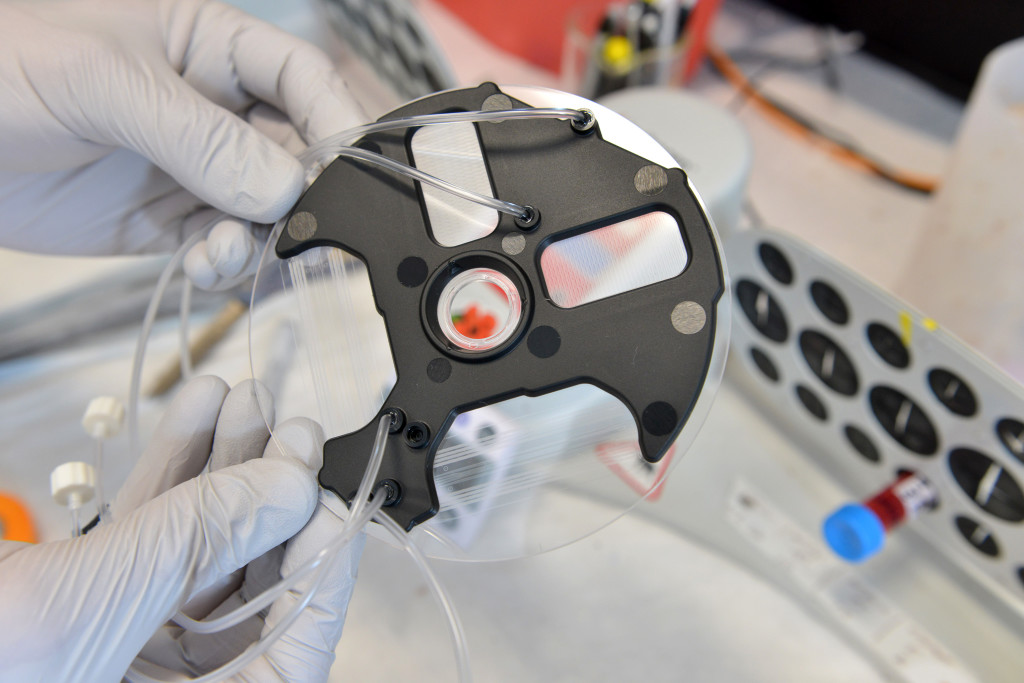 A filter made using equipment formerly used to make compact disks is now used for research into liquid biopsy in the lab of, Dr. Daniel Haber and Dr. Mehmet Toner in Charlestown, MA. Josh Reynolds for STAT (Zimmer)

If liquid biopsies work as hoped, the market in the US alone is projected at $29 billion, according to a 2015 report from investment bank Piper Jaffray.

“It is the one area of oncology you see featured at every single conference,” said Dr. Jorge Villacian, chief medical officer at Janssen Diagnostics, a subsidiary of Johnson & Johnson, which has the sole FDA-approved liquid biopsy on the market. “There’s a great deal of enthusiasm.”

And a great deal of drama.

On-Q-ity, a liquid biopsy startup based in Waltham, Mass., folded in 2013. One of its investors said the technology would likely not be market-ready for another five to 10 years.

And last fall, federal regulators upbraided San Diego-based Pathway Genomics for selling a liquid biopsy kit that purported to screen healthy, at-risk individuals for early signs of cancer. The Food and Drug Administration called it “a high risk test that has not received adequate clinical validation and may harm the public health.”

Nonetheless, Gates and Bezos recently teamed up with Illumina, a leading DNA sequencing company, to launch yet another liquid biopsy startup — this one ambitiously called Grail.

The field is such a roller coaster that Haber and Toner make a point of being cautious and methodical.

“You find strange things, you question yourself, and you test it over and over again to be sure it is right,” Haber said.