Integrating liquid biopsies into the management of cancer

During cancer progression and treatment, multiple subclonal populations of tumour cells compete with one another, with selective pressures leading to the emergence of predominant subclones that replicate and spread most proficiently, and are least susceptible to treatment. At present, the molecular landscapes of solid tumours are established using surgical or biopsy tissue samples. Tissue-based tumour profiles are, however, subject to sampling bias, provide only a snapshot of tumour heterogeneity, and cannot be obtained repeatedly. Genomic profiles of circulating cell-free tumour DNA (ctDNA) have been shown to closely match those of the corresponding tumours, with important implications for both molecular pathology and clinical oncology. Analyses of circulating nucleic acids, commonly referred to as ‘liquid biopsies’, can be used to monitor response to treatment, assess the emergence of drug resistance, and quantify minimal residual disease. In addition to blood, several other body fluids, such as urine, saliva, pleural effusions, and cerebrospinal fluid, can contain tumour-derived genetic information. The molecular profiles gathered from ctDNA can be further complemented with those obtained through analysis of circulating tumour cells (CTCs), as well as RNA, proteins, and lipids contained within vesicles, such as exosomes. 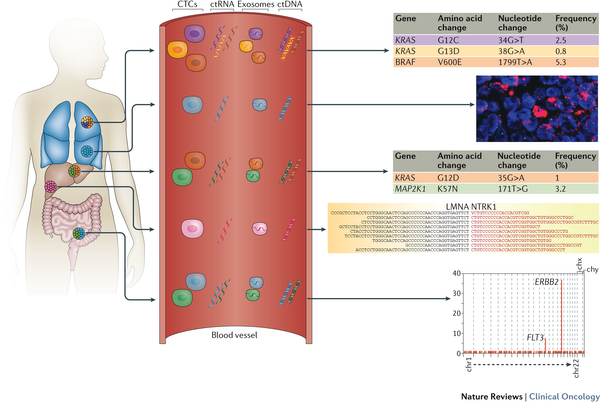 Liquid biopsies of tumour components in the blood, including circulating cell-free tumour DNA (ctDNA) and RNAs (ctRNA), exosomes, and circulating tumour cells (CTCs), can be leveraged to capture the molecular heterogeneity of distinct tumour lesions harbouring different genetic alterations. The tables illustrate the detection of point mutations in oncogenes (G12D, G12C, and G13D mutations in KRAS; V600E mutation of BRAF; and K57N mutation of MAP2K1 (MEK1)) through candidate-gene or next-generation sequencing analysis of ctDNA in plasma. Identification of a LMNA–NTRK gene fusion is depicted in the sequence alignment. Gene copy-number variations can also be detected using fluorescence in situ hybridization analysis of CTCs isolated from the blood, as shown in the fluorescence micrograph, and via whole-exome analysis of blood-derived tumour DNA by next-generation sequencing (as demonstrated for FLT3 and ERBB2 (HER2) amplification).