Exosomes are small (30–100 nm) membrane vesicles secreted by a variety of cell types and only recently have emerged as a new avenue for cell-to-cell communication. They are natural shuttles of RNA and protein cargo, making them attractive as potential therapeutic delivery vehicles. MicroRNAs (miRNAs) are short non-coding RNAs which regulate biological processes and can be found in exosomes.

Here researchers from ReNeuron characterized the miRNA contents of exosomes derived from human neural stem cells (hNSCs). Their investigated hNSC line is a clonal, conditionally immortalized cell line, compliant with good manufacturing practice (GMP), and in clinical trials for stroke and critical limb ischemia in the UK. By using next generation sequencing (NGS) technology the researchers identified the presence of a variety of miRNAs in both exosomal and cellular preparations. Many of these miRNAs were enriched in exosomes indicating that cells specifically sort them for extracellular release. Although exosomes have been proven to contain miRNAs, the copy number quantification per exosome of a given miRNA remains unclear. Herein they quantified by real-time PCR a highly shuttled exosomal miRNA subtype (hsa-miR-1246) in order to assess its stoichiometry per exosome. Furthermore, they utilized an in vitro system to confirm its functional transfer by measuring the reduction in luciferase expression using a 3’ untranslated region dual luciferase reporter assay. 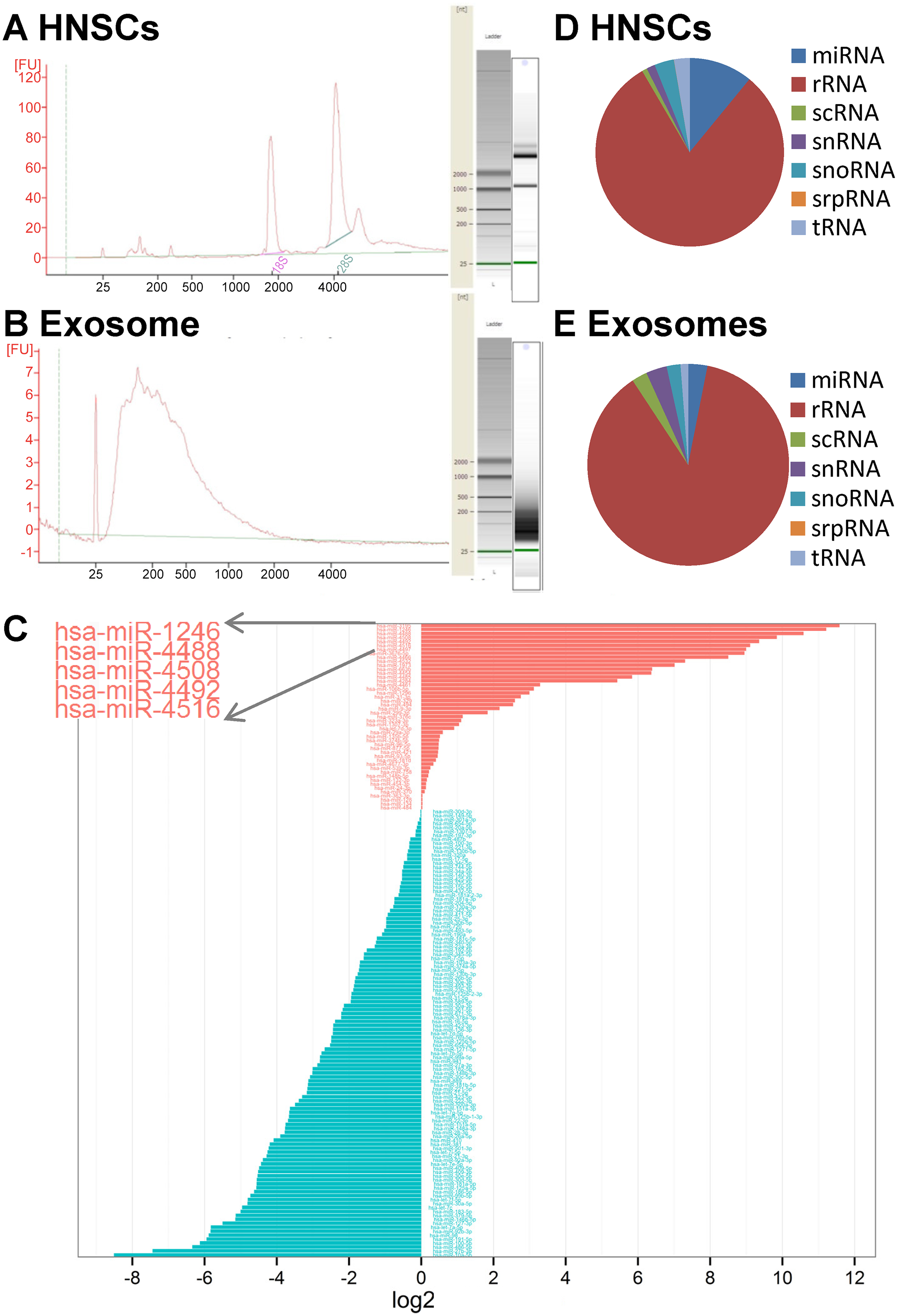 Cellular (A) and exosomal (B) total RNAs were processed by an Agilent 2100 Bioanalyzer. The corresponding virtual gel images generated by the software are depicted as electropherograms. (C) Representative diagram of differential miRNA distribution in exosomes compared to hNSC producers. MiRNA types preferentially released in exosomes are presented in red or retained within the hNSCs in blue, data expressed as log2 ratio of exosomal/cellular miRNAs normalized read counts. Pie chart representation of the distribution of small RNA categories in hNSC (D) and exosome (E) samples.

In summary, NGS analysis allowed the identification of a unique set of hNSC derived exosomal miRNAs. Stoichiometry and functional transfer analysis of one of the most abundant identified miRNA, hsa-miR-1246, were measured to support biological relevance of exosomal miRNA delivery.