Exosomes are cell-derived nanovesicles released into biological fluids, which are involved in cell-to-cell communication. The analysis of the content and the surface of the exosomes allow conclusions about the cells they are originating from and the underlying condition, pathology or disease. Therefore, the exosomes are currently considered good candidates as biomarkers to improve the current methods for clinical diagnosis, including cancer. However, due to their low concentration, conventional procedures for exosome detection including biosensing usually require relatively large sample volumes and involve preliminary purification and preconcentration steps by ultracentrifugation.

Researchers from the Autonomous University of Barcelona present immunomagnetic separation as an alternative method for the specific isolation of exosomes in serum. To achieve that, a rational study of the surface proteins in exosomes, which can be recognized by magnetic particles, is presented. The characterization was performed in exosomes obtained from cell culture supernatants of MCF7, MDA-MB-231 and SKBR3 breast cancer cell lines, including TEM and nanoparticle tracking analysis (NTA). For the specific characterization by flow cytometry and confocal microscopy, different commercial antibodies against selected receptors were used, including the general tetraspanins CD9, CD63 and CD81, and cancer-related receptors (CD24, CD44, CD54, CD326 and CD340). The effect of the serum matrix on the immunomagnetic separation was then carefully evaluated by spiking the exosomes in depleted human serum. Based on this study, the exosomes were preconcentrated by immunomagnetic separation on antiCD81-modified magnetic particles in order to achieve further magnetic actuation on the surface of the electrode for the electrochemical readout. The performance of this approach is discussed and compared with classical characterization methods.

Schematic representation of the construction of the magneto-actuated electrode based on rigid composites (m-GEC) as well as the enzymatic reaction based on hydroquinone mediator. 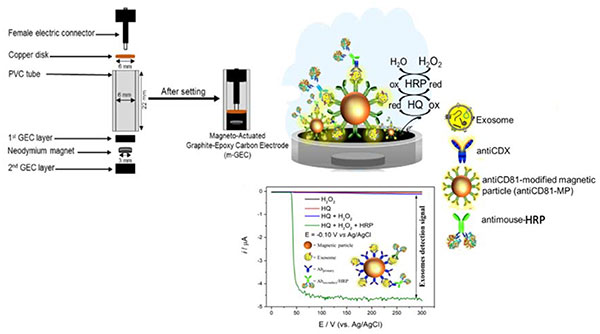