Reported in the journal Nature Communications, the Vall d’Hebron Institute of Oncology´s (VHIO) Gene Expression and Cancer Group, led by Joan Seoane, has pioneered research evidencing the use of cerebrospinal fluid (CSF) as liquid biopsy for the potential prognosis, treatment, identification and tracking of brain tumor genomic alterations not only in real time but over time. Concentrations of circulating central nervous system tumor DNA are very low in plasma, but very high in CSF.

A liquid biopsy in CSF, obtained by lumbar puncture, is much less invasive and less risky for the patient than traditional procedures used to extract brain tissue samples. This study was partly financed by a grant from the Spanish Association against Cancer (AECC) awarded to Joan Seoane – support which has not only fuelled the research efforts that have now led to the proof of concept of this approach as well as promising new direction in the study of brain cancer and metastases. Findings also show that this circulating tumor DNA can both facilitate and complement the diagnosis of leptomeningeal carcinomatosis (LC).

The identification of each and every tumor type along with each respective, individual molecular makeup is critical in tackling cancer with greater precision. To date, extraction of brain tumor tissue for analysis has consisted of a punch biopsy or surgery. Such approaches suppose risk per se and do not necessarily facilitate access to a representative part of the tumor. A new technique, liquid biopsy, has been recently and successfully developed at research level, which detects a tumor’s specific mutations by means of a plasma sample containing circulating tumor DNA.

As reflected in recent literature, the liquid biopsy ´policing´ of cancer is not only promising a more precise treatment selection for each individual patient, but could also help us to be steps ahead of cancer´s next move. Compared to traditional tissue biopsy, it is a much less invasive technique, and represents a significant forward step towards better detecting cancer mutations, tracking the evolution of disease, as well as predicting response to therapy. “With these important considerations in mind we looked for a way to apply this type of liquid biopsy to brain cancer, especially in view of the obstacles associated with accessing this tumor type”, explains Joan Seoane, Director of Translational Research at VHIO, ICREA Professor, and Professor at the Universitat Autònoma de Barcelona (UAB), who led the study.

Liquid biopsy in plasma has already proven useful in metastatic colon, breast and lung cancer, but not as successful for brain tumors, for several reasons. “Our main limitation was that circulating tumor DNA levels for brain tumors are very low in plasma. But the brain has its own closed circuit of fluid, cerebrospinal fluid, which bathes the brain and spinal cord, and is therefore in direct contact with tumor cells,” continues Seoane, “and we found circulating tumor DNA in CSF at such high levels that we were able to detect and characterize tumors with a high degree of sensitivity”.

Glioblastoma is the most common and aggressive malignant brain tumor. One of the characteristics of glioblastoma is that the tumor always reappears after time. Added to the mix of difficulties associated with this tumor type, there are currently few therapeutic options available and accessing the tumor is problematic. Upon diagnosis, the tumor is surgically resected as a first step in treatment, after which time the patient receives both radiotherapy and chemotherapy. However, the tumor nearly always recurs and, when it does, it presents different genetic alterations from the primary tumor. This scenario severely hampers therapeutic possibilities since the new tumor will differ from the previous one, thus requiring different therapy. Performing traditional tissue biopsy on a relapsed tumor is seldom indicated. “Mirroring certain successes to-date of applying liquid biopsy across other tumor types, the use of tumor DNA circulating in CSF as a liquid biopsy for brain tumors could be much less invasive than standard tissue biopsy to characterize the genetic alterations of the new tumor. This new approach to liquid biopsy in CSF could help, in some cases, to consider novel, more specific and targeted experimental therapies, which could in turn also improve clinical response”, explains Josep Tabernero, Director of VHIO, Head of the Medical Oncology Department of Vall d’Hebron University Hospital, co-author of the study and a leading reference in the novel field of liquid biopsy. 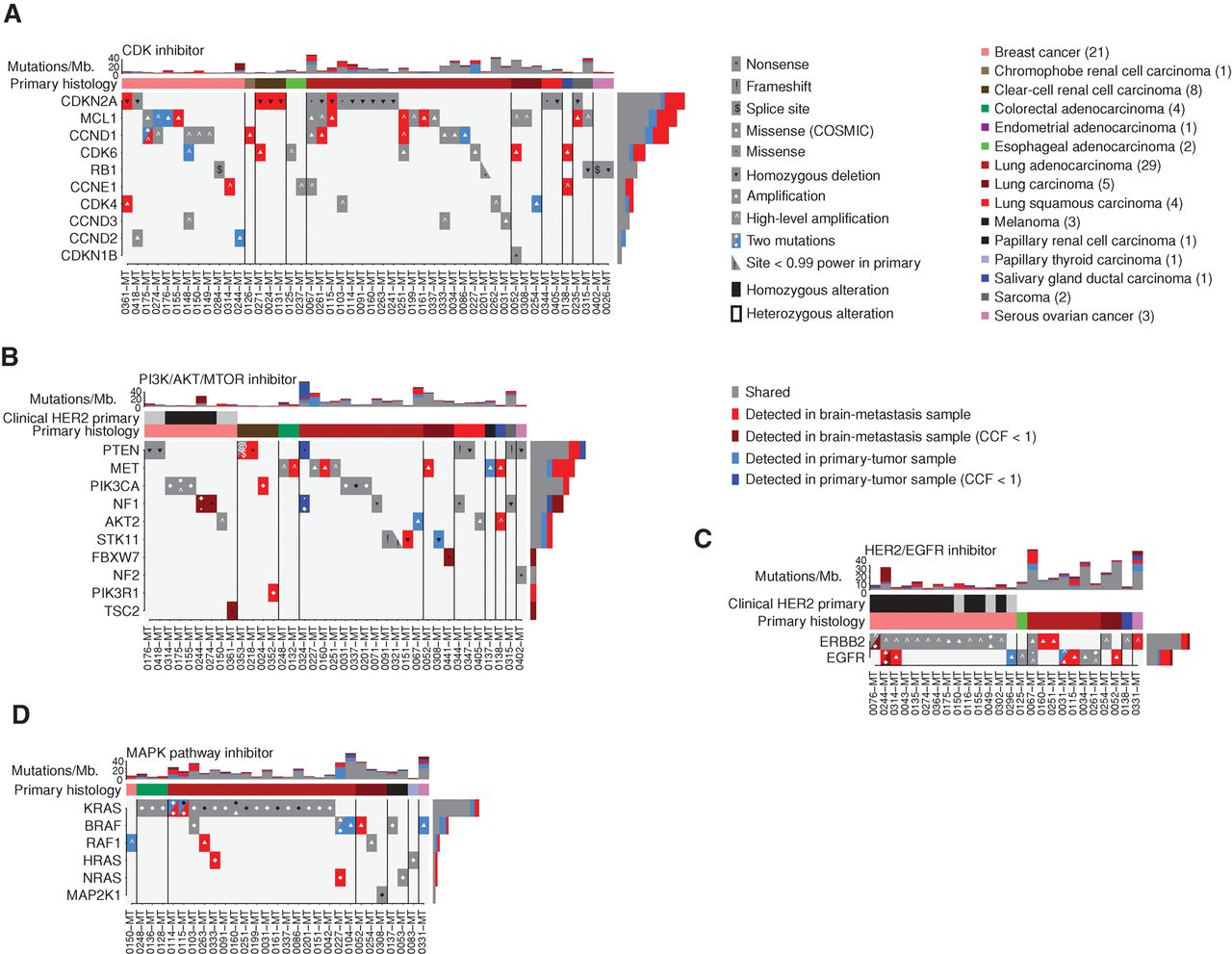 The landscape of potentially clinically actionable alterations in brain metastases and primary-tumor samples. A–D, alterations in genes (rows) that may predict sensitivity to the indicated class of targeted agent. Vertical columns correspond to cases, which are ordered by primary histology and presence/absence of alterations. Stacked bar graphs indicating the number of somatic point mutations detected in each phylogenetic branch of each case (columns) are shown at the top of each panel. HER2 status determined during clinical evaluation is denoted by: black, positive; gray, negative; white, not measured. COSMIC, Catalogue of Somatic Mutations in Cancer.

The study also focused on leptomeningeal carcinomatosis — the tumor infiltration of the fine film that covers the brain and spinal cord and which occurs as a metastasis of other tumors. Its diagnosis is complicated on imaging tests and the possibility of “catching” a tumor cell for study by lumbar puncture is remote. “Compared to plasma, cerebrospinal fluid better captures the mutations in patients with brain tumors. The possibility of studying DNA fragments in this fluid by liquid biopsy, as we have done, greatly expands diagnostic possibilities, improves stratification based on genetic profiling, facilitates better and less invasive monitoring of patients. Our findings should also ultimately translate in clinical benefit for certain patients with brain tumors”, says Leticia De Mattos-Arruda, first author of the paper and member of Joan´s Group.

Metastasis is the most common cause of death from cancer and brain tumors formed through this process are ten times more common than primary tumors. Patients with brain metastasis tend to present a poor prognosis and do not usually respond to treatment. 200,000 cases are diagnosed every year in the United States alone and mean survival is 3 to 27 months after metastasis. Recent studies have shown that, due to the tumor environment, brain metastases evolve independently, developing shared genetic alterations that, in half of the cases, evade detection in the primary tumor. This explains why the treatment used for the primary tumor does not usually work against metastases. “This new advance represents a potential game changer in brain cancer, whether they are primary tumors, relapses or metastases. As recently observed in a study in which we participated*, 53% of metastatic brain tumors present different genetic alterations from those found in the first biopsies of primary tumors,” affirms Joan.

Towards precision oncology against brain tumors

Joan Seoane and his team have taken an important next step towards rendering anti-cancer therapy more precise in brain cancer: “the identification of these alterations by CSF-circulating tumor DNA will enable us to identify the characteristics of metastasis and facilitate the development of personalized treatments.” Furthermore, liquid biopsy for brain tumors opens a new, pioneering line of research into biomarkers that enable us to monitor the progress of the disease and ultimately help us to be steps ahead of cancer´s next move. “This study of circulating tumor DNA has enabled us to monitor tumors by liquid biopsy of CSF. This approach is therefore a potential tool for stratifying patients, assessing their prognoses, and closely monitoring the course of disease and their response to therapy in a minimally invasive manner,” adds Josep Tabernero. Tumor monitoring will enable us to evaluate the effect of treatment and to assess drug effectiveness as the cancer progresses.

Considering the potential of liquid biopsies that we are now witnessing at research level, there is every indication that this technique developed at VHIO, will be fundamental in the future diagnosis and treatment of brain tumors.