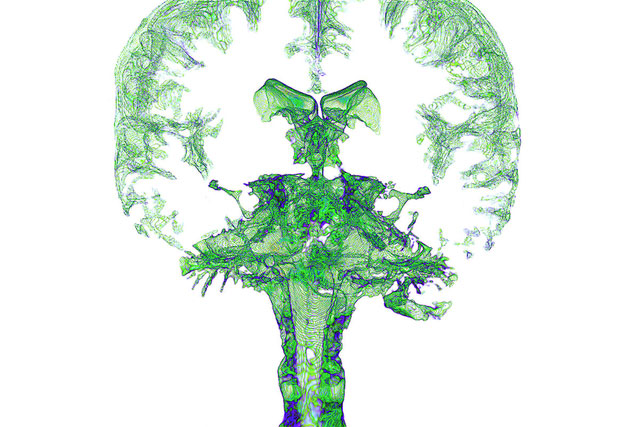 Cerebrospinal fluid flows in and around the brain and spinal cord and protects them. Brain tumors shed cancer DNA into this fluid, which can be extracted through a spinal tap and analyzed for mutations.

Studying mutational changes that occur in brain tumors has been difficult. A new approach involves analyzing cancer DNA that the tumor sheds into the fluid surrounding the brain and spinal cord. This fluid can be collected in biopsies to help with diagnosis and choosing treatment.

Gliomas are the most common type of brain cancer in adults and include glioblastomas and lower grade gliomas. They usually come back after initial treatment and, like many other cancers, are known to evolve genetically. Because of this, it is important to be able to monitor the genetic changes over time. But it would be risky to take repeated biopsies of a brain tumor to keep tabs on these changes.

A minimally invasive alternative has emerged that might provide the same information. Brain tumors shed small amounts of DNA into the fluid surrounding the brain and spinal cord. These bits of tumor genetic material are called circulating tumor DNA, or ctDNA.  The hope has been that analyzing the ctDNA in the spinal fluid would provide an accurate picture of a brain tumor’s mutational landscape.

Now a study led by Memorial Sloan Kettering researchers suggests that this approach can work. The researchers found ctDNA in the spinal fluid of about half of glioma patients in the study. In addition to providing information that could identify potential drug targets, the very presence of ctDNA in the fluid indicated more tumor tissue in the brain. It also increased the likelihood of a worse outcome.

“This shows we can use a spinal fluid sample to observe molecular changes in a tumor in about 50 percent of people with recurrent gliomas,” says MSK neurologist Alexandra Miller, the study’s first author. “We know tumors evolve over the course of the disease, and this could be a way to track and understand the mutational changes.”

“We are hoping that this approach will help us diagnose gliomas that cannot be biopsied,” says medical oncologist Ingo Mellinghoff, who led the study along with geneticist Michael Berger. “It will also help us offer targeted therapies to more people with glioma as well as monitor the tumor’s response to therapy.”

A New Kind of Liquid Biopsy

Analyzing DNA shed from tumors into bodily fluid is often called a liquid biopsy. Most liquid biopsies have involved cancer cell DNA in the bloodstream or urine. Studies led by MSK researchers have demonstrated that liquid biopsies can guide the treatment of other cancers, such as prostate cancer and breast cancer.

Brain tumor ctDNA does not spill readily into the blood due to the tight seal of the blood-brain barrier. It is much more reliably detected in the spinal fluid. The fluid can be obtained through a spinal tap, also called a lumbar puncture. This procedure has long been done to diagnose infections in the nervous system and a wide variety of other conditions, including leptomeningeal disease, the spread of cancer from some other part of the body into the spinal fluid.

In the Nature study, the researchers evaluated ctDNA collected from the spinal fluid of 85 people whose gliomas had returned after treatment. The patients consented to have leftover fluid analyzed for research purposes.

The research team found ctDNA in 42 of the 85 samples. When they looked at the medical records and pathological information for the patients, they found that people with ctDNA in their spinal fluid were more likely to have had aggressive forms of glioma in the brain. These people were also four times more likely to have died from their tumor.

The researchers sequenced the ctDNA using MSK-IMPACT™, a genetic test that looks for cancer-related mutations. They found a broad range of genetic changes, most of which were present in biopsies taken from the tumor at the time of diagnosis. But there were some alterations that appeared only in either the primary brain tumor or in the ctDNA. This confirms that the cancers evolved between biopsies.

We know tumors evolve over the course of the disease, and this could be a way to track and understand the mutational changes.

“This was a retrospective study,” Dr. Berger says. “What’s exciting now is that we are working with colleagues in the Molecular Diagnostics Service to validate this approach for routine clinical use. Sequencing spinal fluid represents a novel and important application for MSK-IMPACT, which is already being used to profile tumor tissue from more than 200 patients every week.”

For people who initially respond to treatment with surgery or radiation, monitoring ctDNA in the spinal fluid also might give an early warning sign that the tumor is coming back. In the short term, Dr. Miller hopes detection of mutations in ctDNA will soon allow more people to be eligible for clinical trials of targeted therapies.

“When you’re designing clinical trials testing a targeted therapy aimed at a specific mutation, you first need to make sure that mutation is present,” Dr. Miller says. “Ideally, for clinical trial enrollment, I could get a spinal fluid sample at the time of diagnosis, and then confirm that the mutation was still there if the disease recurred and we wanted to start targeted therapy.”

Down the road, understanding the mutational changes that cause gliomas to progress could advance the development of new drugs.