Analyzing tumor DNA fragments in the bloodstream, known as circulating tumor DNA (ctDNA), may offer a more complete view of a patient’s cancer from a molecular perspective. These findings were published in Cancer Discovery.

When tumors driven by drug-targetable genetic mutations develop resistance to a targeted therapy drug, some metastases may have additional targetable mutations. However, the usual practice of obtaining a biopsy of only a single metastatic lesion to test for new mutations could miss these mutations.

“We found that the molecular mechanism of resistance that emerges in one metastatic lesion while on a given therapy can be totally different from the mechanism driving resistance in a neighboring lesion in the same patient,” said Ryan Corcoran, MD, PhD, translational research director for the Center for Gastrointestinal Cancers at the MGH Cancer Center, and co-corresponding author of the report.

“Our conclusion is that the standard practice of performing molecular testing on a biopsy from a single metastatic lesion may be inadequate and that circulating tumor DNA testing may better capture the molecular diversity in a patient’s tumor, enhancing our ability to select effective therapies to overcome resistance.”

Liquid biopsy, usually obtained from a blood sample, is an area of increasing interest in oncology. This study focused on a patient with colorectal cancer that metastasized to the liver. The patient responded to cetuximab, an EGFR antibody drug. After 15 months of treatment, however, the patient’s disease became resistant.

A single liver metastasis was biopsied and found to have a MEK1 mutation not present before the cetuximab treatment. The patient was then treated with the MEK inhibitor trametinib and another EGFR antibody, panitumumab. The patient initially appeared to respond to this combination therapy; however, 3 months later an abdominal CT scan revealed the MEK1-mutated lesion had shrunk but additional metastatic lesions had continued to grow. 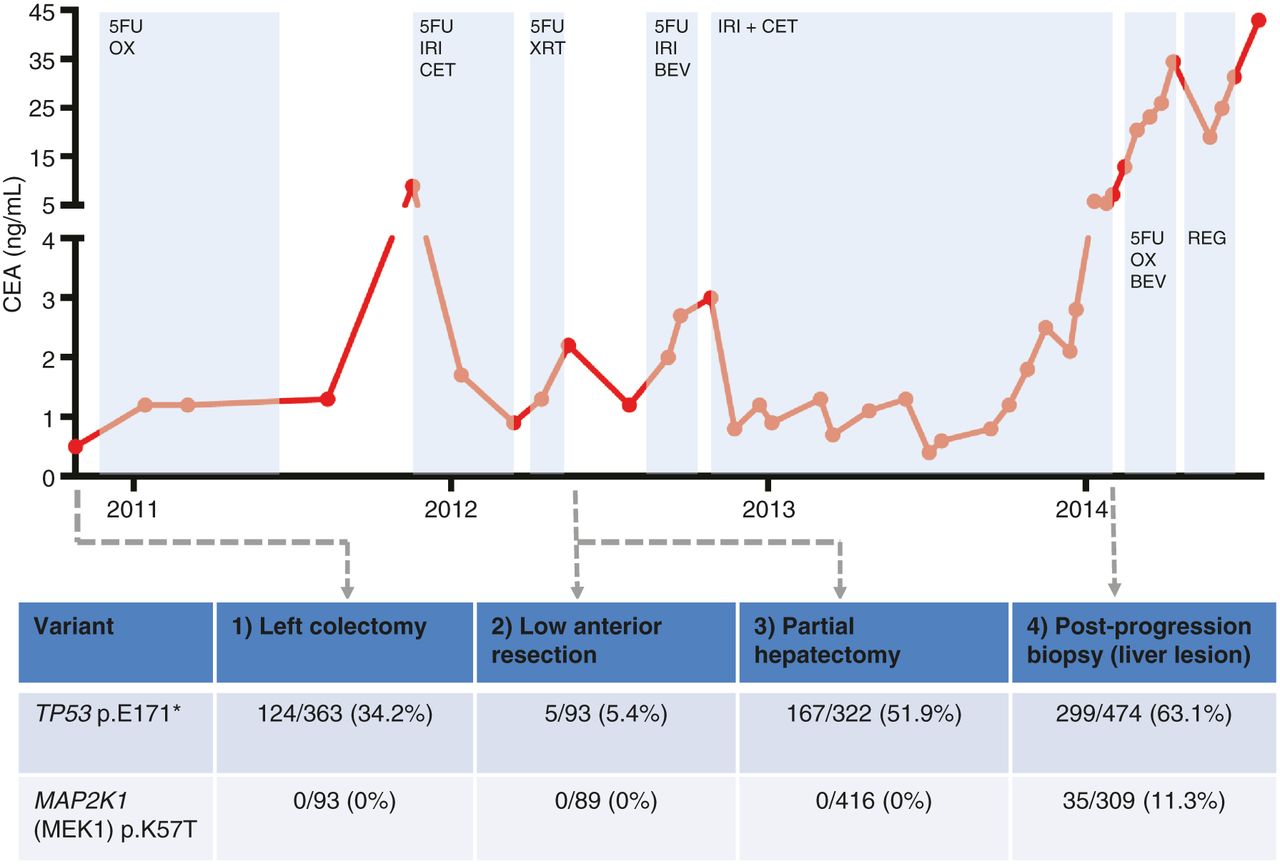 In a comparison of blood samples taken at the start of treatment with those taken during the combination therapy, a dramatic increase in a KRAS mutation was seen. The KRAS mutation did not occur in the MEK1-mutated lesion but it was detected in 1 of the metastatic lesions that was progressing.

“Analysis of a single-lesion biopsy is inadequate to guide selection of subsequent targeted therapies. ctDNA profiles allow the detection of concomitant resistance mechanisms residing in separate metastases and assessment of the effect of therapies designed to overcome resistance,” stated the authors. They noted that liquid biopsy can be repeated frequently with little inconvenience to the patient, which may be better for monitoring treatment than single-lesion biopsies.

Dramatic progress has occurred in recent years in the ability to analyze ctDNA, explained Corcoran. Liquid biopsy is not ready to entirely replace tumor biopsies, but the potential of liquid biopsy to provide real-time monitoring of a patient’s tumor as it develops resistance to therapy needs to be exploited.