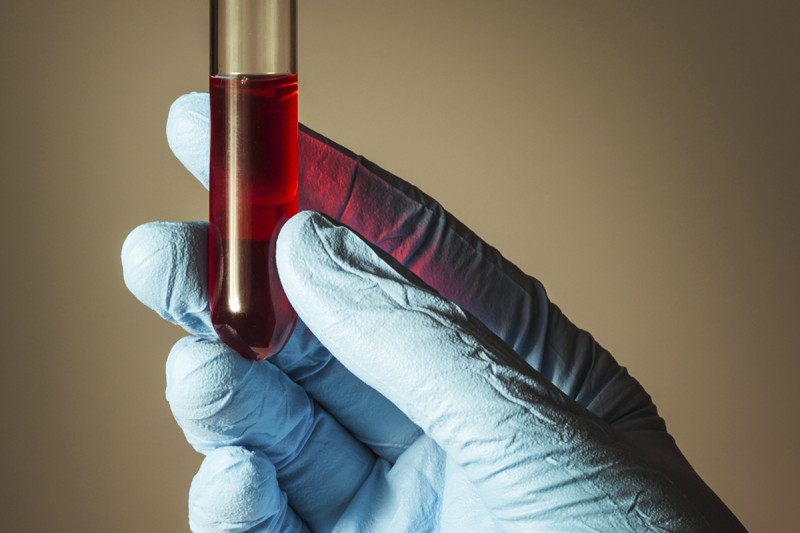 A liquid biopsy analyzes free-floating tumor DNA in the blood sample of a cancer patient. Two new studies from MSK researchers demonstrate that this technique provides valuable information about which genetic mutations may be driving certain breast cancers and helps predict how well patients may respond to new therapies.

Highlights
Two new studies led by Memorial Sloan Kettering researchers demonstrate the potential of the liquid biopsy, which uses blood samples drawn from cancer patients to analyze trace amounts of free-floating tumor DNA.Research shows that this minimally invasive approach can reveal essential information about which genetic mutations may be driving the cancer — especially when it is advanced — and can help predict how specific patients will respond to certain therapies.The studies were led by MSK physician-scientist Sarat Chandarlapaty and Physician-in-Chief José Baselga and reported this week at the San Antonio Breast Cancer Symposium.

A liquid biopsy offers advantages over a conventional tumor biopsy. Since surgery is not needed, patients can be tested more frequently. In addition, a liquid biopsy may provide a more global — and therefore more accurate — picture of the patient’s cancer. Sequencing free-floating tumor DNA may better capture the diversity of genetic alterations found in cancer cells in different parts of the body, including the primary tumor and metastases.

“Testing for mutations in the blood can help identify the population of patients who might benefit most from certain drugs or drug combinations,” Dr. Baselga says. “The liquid biopsy analyses in these two studies gave us incredibly important information. Going forward, liquid biopsy will become standard practice for testing new drugs monitoring response to current therapies.”

Both studies involved women whose breast cancers were hormone receptor–positive, meaning that their cancer cells bear receptors — proteins — that pick up signals from hormones telling the cells to grow. These patients often receive drugs called aromatase inhibitors that slow or stop the growth of hormone-sensitive tumors (a treatment called hormone therapy). Although aromatase inhibitors are usually effective, some patients develop resistance, so researchers are studying therapies that combine new drugs with the standard treatment.

Mutations Are Common and Lead to Worse Outcomes

Dr. Chandarlapaty and colleagues analyzed liquid biopsies from 541 patients enrolled in the phase III BOLERO-2 clinical trial, which previously found that adding the drug everolimus to the aromatase inhibitor exemestane improved outcomes for most advanced estrogen receptor (ER)–positive breast cancer patients. (ER-positive patients have cancer cells with an estrogen receptor on their surface, allowing the hormone to fuel their growth.)

Their analysis of the blood samples revealed that women had significantly worse overall survival if their cancer cells carried one or both of two specific mutations that occur in the gene that makes the estrogen receptor: D538G and Y537S. The researchers detected the D538G mutation in 83 patients, the Y537S mutation in 42 patients, and both mutations in 30 patients.

“There is a real diversity in how tumors respond to drugs targeting the estrogen receptor, and therefore a real diversity in patient outcomes,” Dr. Chandarlapaty explains. “We wanted to find out whether mutations in this receptor are common in patients with advanced breast cancer — and if so, whether this affects how well the patients respond to treatment. This study shows us that people with the mutations don’t respond to the currently used therapies as well and die from their disease sooner.”

His team was surprised by how common the D538G and Y537S mutations were in this patient group — and especially by how often the mutations were detected in the blood samples compared with samples from the primary tumors.

He says there are likely two reasons for this: “Tumors are often heterogeneous, so a sample from the tumor may miss cancer cells containing a specific mutation. In addition, some mutations develop as a result of resistance to treatment, so a liquid biopsy may detect mutations not found in the primary tumor sample, which often is taken earlier.”

A team led by Dr. Baselga found that detecting a mutated PIK3CA gene in a blood sample can predict how well some advanced breast cancer patients may respond to the experimental drug buparlisib. A mutated PIK3CA gene can activate the PI3K disease pathway, which promotes resistance to hormone therapies. Buparlisib blocks the PI3K pathway, and thus may increase a woman’s sensitivity to hormone therapy.

The team analyzed blood samples from 587 patients entering the phase III BELLE-2 trial, which is testing the safety and effectiveness of adding buparlisib to the standard hormone drug fulvestrant to treat women with ER-positive breast cancer who have grown resistant to aromatase inhibitors.

A simple blood test proves to be quite sensitive in detecting very important alterations.

While the entire study population benefited from the combination therapy, the presence of a PIK3CA mutation in a patient’s liquid biopsy had the most striking effect. Among patients who carried the PIK3CA mutation, those that received buparlisib plus fulvestrant had seven months of progression-free survival (PFS) — the length of time after the treatment during which the patient lived with the cancer and it did not get worse — compared with only 3.2 months for those receiving fulvestrant plus a placebo.

“These effects are quite dramatic in patients with the PIK3CA mutation — an increase from three months to seven months is huge,” Dr. Baselga said. “For the first time, we show that inhibiting the PI3K pathway may be a viable option for patients with hormone therapy–resistant breast cancer.”

Among those who did not have the PIK3CA mutation, there was no difference in PFS, suggesting that adding buparlisib did not provide any advantage. Being able to identify patients who will not benefit from the new drug combination is also important, as the side effects proved to be significant, with 25 percent of patients having serious adverse events such as high blood sugar and potential early signs of liver damage.

A New Way of Monitoring Tumors

Both of these highlighted studies provide a glimpse into how the liquid biopsy has emerged as a powerful diagnostic and treatment tool for people with cancer. Dr. Chandarlapaty emphasized the essential role this technique will play in guiding the development of new therapies.

“This is a vital point for the medical community — a simple blood test proves to be quite sensitive in detecting very important alterations,” he says. “Finding out which cancers respond best to which treatments is key to helping make breast cancer care more precise and effective.”