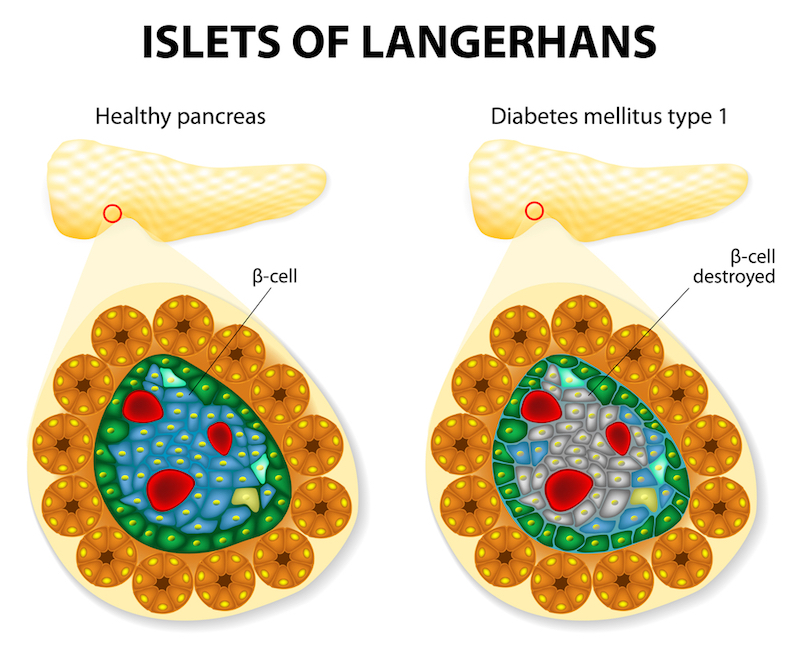 In Type 1 Diabetes, the immune system attacks the beta cells, the insulin producing cells that reside in the islets of Langerhans region of the pancreas

from Live Science by Tia Ghose –

In people with type 1 diabetes, the body wages a ruthless campaign of destruction against certain cells in the pancreas because it mistakes them for foreign invaders. Now, one of the long-sought triggers of this assault might have been found, according to a new study from Switzerland.

The cells that are destroyed, called beta cells, normally produce certain proteins in packages called exosomes. The new study found that, when the cells are in trouble, such as after an infection or other stressful event, these packages are decorated with chemical warning signals that may act as homing beacons that lure immune cells.

“When beta cells are subjected to stress, the exosomes are released at higher levels and now contain proteins that signal danger to alert the immune system,” said study author Steinunn Baekkeskov, a biochemist at the Swiss Federal Institute of Technology in Lausanne, Switzerland.

The new findings could provide a means to shut off the wayward immune system, thereby preventing the development of type 1 diabetes in people who are at very early stages of the disease, the study authors suggested.

Normally, beta cells release the hormone insulin, which helps body cells take in sugar from the bloodstream. People with type 1 diabetes, whose beta cells are destroyed, must inject insulin into their bodies, or they will die. Those with the disease constantly monitor their blood sugar and take many doses of insulin each day to regulate their blood sugar.

But even with these treatments, blood sugar levels that frequently run too high and too low mean that people with the condition face an increased risk of complications such as kidney failure, heart disease and nerve damage.

In an ongoing, decades-long study, scientists have monitored the family members of people with type 1 diabetes (who are at increased risk of developing it themselves), and found evidence that the autoimmune assault begins before people show symptoms. Early on in the course of the disease, people may have high levels of certain antibodies that bind to pancreatic proteins found in the beta cells. If a person tests positive for two or more antibodies to these proteins, it virtually guarantees that he or she will develop the disease eventually, even if the person has no symptoms for years, according to a 2015 study in the journal Diabetes Care.

These findings have raised researchers’ hopes of intervening early, to shut off the immune attack in people with antibodies before too many beta cells are killed, Baekkeskov said.

“Antibody-positive individuals, who have not yet developed clinical disease, are candidates for immune preventive therapy to block beta-cell destruction and prevent the development of type 1 diabetes,” Baekkeskov told Live Science in an email.

To answer that question, Baekkeskov and her colleagues analyzed the exosomes from both human and rat beta cells. They found that the exosomes carried the beta-cell proteins recognized by the antibodies. In addition, these exosomes seemed to attract immune cells and activate them, she said.

What’s more, when the cells were under stress, the exosomes were decorated with chaperone proteins, or special molecules that take newly made proteins and help them fold or travel through the cell to their final destination, Baekkeskov said.

However, in this case, the chaperone proteins were not benign; they acted as a flashing emergency light that signals danger to the immune system. From there, immune molecules flag the molecules as dangerous, the researchers hypothesized in the Nov. 21 issue of the journal Diabetes.

It’s possible that inflammation, such as the response to an infection or other assault, stresses the beta cells and causes them to release exosomes marked with these warning signals, the researchers said.

At that point, the immune system launches an unrelenting assault, and the immune system’s long memory makes it very hard to shut off the attack. (However, the study doesn’t address whether there may be many other initial triggers for beta-cell destruction.)

The new findings suggest a way to reprogram the immune system. One possibility would be to engineer an exosome mimic that can lure immune cells to them. These exosomes could be covered with chemical signals that lure the beta-cell-killing immune cells and block or kill them, Baekkeskov said.