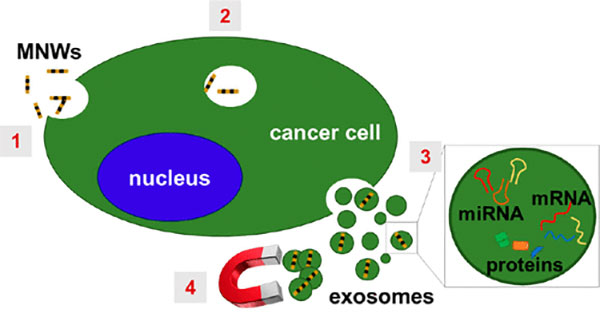 Isolating tumor exosomes (TEX) secreted by cancer cells can provide valuable information about the state of a tumor. Researchers from the University of Minnesota and  the Universidad de Cantabria, Spain present a method to rapidly isolate TEX using magnetic nanowires (MNWs).

Specifically, two sets of Fe/Au segmented MNWs were used to isolate TEX released by canine osteosarcoma cell lines (OSCA 8, 32, and 40). These MNWs were prepared by electrodeposition showcasing similar length (2.2(1) μm) and diameter (36(3) nm) but different Fe/Au segment thickness: 120(20)/30(6) nm (sample A) and 28(7)/3(1) nm (sample B). Magnetic measurements indicate that we can effectively tune the magnetic response of the MNWs by changing their segment thickness, obtaining a more anisotropic behavior for sample A. The internalization of these MNWs by OSCA cells as a function of their concentration has been followed by fluorescence microscopy, and a concentration around 25 μg of Fe/Au MNWs per 3 × 105 cells has been defined as optimal. Electron microscopy images have revealed that, once internalized, these MNWs end up residing within lysosomes inside the cancer cells, where they tend to be degraded (especially the Fe segments) and fragmented into smaller pieces. Lower degradation for sample B has been observed and related to differences in the synthesis/functionalization process of both samples. The researchers have hypothesized that these fragments of Fe/Au MNWs are packaged into TEX released to the medium which can then be isolated via a magnetic stand. This has been tested by carrying out TEX isolation experiments on the OSCA cell and comparing the magnetically isolated TEX with those isolated by using conventional methods based on centrifugation. Nanoparticle tracking analysis (NanoSight) has confirmed that the TEX isolated with MNWs have a comparable size distribution and yield to those obtained by using conventional methods, indicating that our magnetic isolation method can consistently provide relatively high TEX yields in a low-cost and fast way.