Liquid biopsies have advanced rapidly in recent years for use in diagnostic and prognostic applications. One important aspect of this advancement is the growth in our understanding of microRNA (miRNA) biology. The measurement of miRNAs packaged within exosomes, which are constantly released into the blood stream, may reflect pathological changes within the body.

Researchers at the University of Toledo College of Medicine performed miRNA profiling using plasma and plasma-derived exosome samples from two animal models of kidney disease, the 5/6th partial nephrectomy (PNx) and two-kidney-one-clip (2K1C) models. The RT-qPCR-based profiling results revealed that the overall miRNA expression level was much higher in plasma than in plasma-derived exosomes. With 200μl of either plasma or exosomes derived from the same volume of plasma, 629 out of 665 total miRNAs analyzed were detectable in plasma samples from sham-operated rats, while only 403 were detectable in exosomes with a cutoff value set at 35cycles. Moreover, the average miRNA expression level in plasma was about 16-fold higher than that in exosomes. The researchers also found a select subset of miRNAs that were enriched within exosomes. The number of detectable miRNAs from plasma-derived exosomes was increased in rats subjected to PNx or 2K1C surgery compared to sham-operated animals. Importantly, they found that the changes of individual miRNAs measured in plasma had very poor concordance with that measured in plasma-derived exosomes in both animal models, suggesting that miRNAs in plasma and plasma-derived exosomes are differentially regulated in these disease conditions. Interestingly, PNx and 2K1C surgeries induced similar changes in miRNA expression, implying that common pathways were activated in these two disease models. Pathway analyses using DIANA-miRPath v3.0 showed that significantly changed exosomal miRNAs were associated with extracellular matrix (ECM) receptor interaction and mucin type-O-glycan synthesis pathways, which are related with tissue fibrosis and kidney injury, respectively.

Pathway analysis based on changes of miRNAs in exosomes 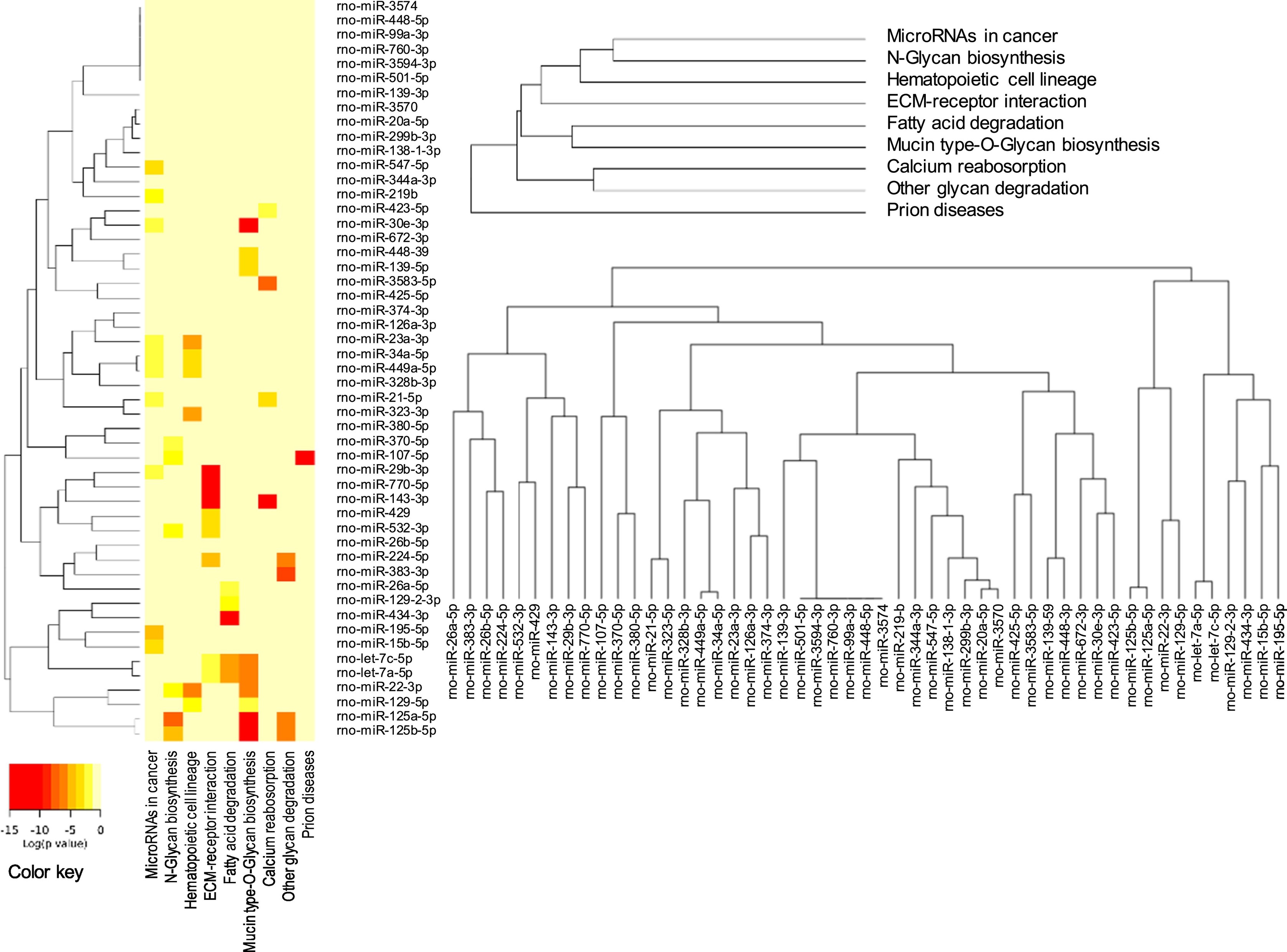 Exosomal miRNAs from PNx rats that have at least two-fold change and p < 0.05 were included in the pathway analysis using DIANA-miRPath v3. 0 web server.

These results demonstrated that due to the differential changes in miRNAs, the measurement of exosomal miRNAs cannot be replaced by the measurement of miRNAs in plasma, or vice versa. The researchers also showed that a set of miRNAs related with kidney injury and organ fibrosis were dysregulated in plasma-derived exosomes from animal models of kidney disease.